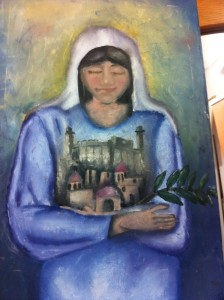 On a cloudy day Jonathan and I took a bumpy bus-ride to Gush Etzion where Palestinian Ali Abu Awad started talking to Jewish settlers. We heard the following story from 3 settlers. The three work for the program Roots. They organize after school programs for both Arab and Israeli, summer camps, photography club, and field trips to sites. The children come from settlements where Jews want their kids to know Palestinians and vice versa. Gush Etzion seems to encompass a huge block of land with 8 nearby settlements.

The Jewish men at Roots defined Zionism as a movement to let Jews live fully their religion, be close to the land and build their livelihood from the land in Israel. This was revealing and similar to aspirations of what Arabs have told me living in Palestine. One of our hosts left his settlement where he was replacing car windows broken by stones thrown, to make time to talk with us at Roots. I was very appreciative of their openness and very aware of their privilege and comfort traveling wherever, and whenever they want.

“The violence the settlers sustain from Palestinians is constant. On first arrival, it’s dismaying, one of them explained. This man despaired ten years ago, and was not sure he could continue living with the animosity. But his rabbi said that he had made a commitment to serve God here. “Our God is a God of peace. Stop hating the boys throwing stones at you. accept that your Palestinian neighbors are following Islam, which is a true religious path. have faith that as each follows their God, peace can come. Can Palestinians accept us Jews?” this settler asks. “Jews are not foreigners, they are coming back home. Settlers are close to the land, and viscerally attached to it.” 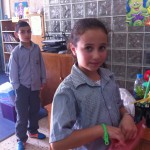 He believes in serving as best he can in this moment. “The Temple will come, but it can only come by God. God ordains it, and our hands will build it.”

“I don’t have hope in peace, asserted another settler. I know I’m not going to change the polarization, but I’m obliged to get involved. Zionism comes from a good desire, although it has some ethnocentrism. It can lead to bad actions. A Jew, a Zionist, went to the Temple Mount without bad intentions (in 2000 when Sharon went to the Holy site reserved for Muslims). He went to the Temple Mount to be a good Jew, not to restrict the prayers of Muslims. This Jew was ignorant but his intention was to expand the pluralism of that place.”

“As a Jew moving to Gush Etzion in 1970s, I didn’t take the land from anyone. I was working the land and Israel controlled the land. But I was willing to move off the land if Jordan (King Hussein ruled) told the settlers to move. It’s not a question of whether the settlement is to or not to be. The question is How to be.”

I wondered as these Jews talked of reconciliation why they don’t focus on stopping the stealing of Palestinian land. But if I in Massachusetts met some Indians and they convinced me that their ancestors years ago had lived where I live, would I be willing to give my house back to these Indians? Or would I just work for human rights for the next generation of Native Americans? Many Jews working for peace, don’t want to give up their personal assets. 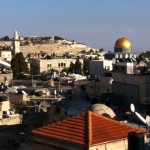 “At Roots, we expect to give recognition to the rights of two people in two countries. We need to be aware of each others’ narratives. The honoring of the Nakba isn’t allowed in schools, and it should be. But at least now for the first time Education Departments are debating whether the word Nakba should be discussed. There is an motion to require Arabic language to be taught in Israeli schools.” 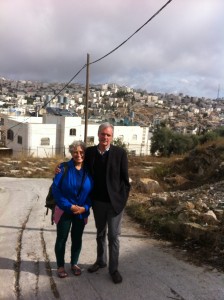 “Back in the US, Jews are dedicated to protecting Israel. We as Jews have our history, our religion, and our identity and Jewish groups are rigid in keeping that. In Israel (different than the US) I find Jews willing to be vulnerable in seeing their part in the problem. The two state solution is out-dated and inherently flawed. Roots is not about changing laws, but building community. The two state solution is still about separation. This conflict can take you hostage and run over you like a runaway truck.”

“Our collective society in Israel has been taken hostage by community norms. We are afraid of our neighbors. How can we break out of that peer pressure to talk to the other side? We are alll on a path of redemption. Jews can just decide to build the Third Temple. The only way the Temple will come to be is for God to see that Jews ‘are good.'”

We shared our journey as Quakers and promised to continue the dialogue.