Hebron is a tinderbox. There are confrontations daily. Before the sun rises the melodic cry of the muezzin drifts across the dark city. People cook their tea and have pita, yogurt, and diab (mix of tahini and grape syrup) for breakfast. Hebron, maybe 1/2 million people, is full of traffic by 7 am. People are tense, wondering what clashes may happen today. The last prayer from the minerets is about 6:20, after sunset. We rest and heal in the cocoon of the Assfour, our adopted family.

The surge of violence started a month ago. The first casualty of war is the Truth. I’m not sure what is true but the fear that the Israelis are trying to control the Mount Dome/Al Asqa access is what stirred up Palestinians. For years Zionists have claimed that they want to build the Third Temple on the site of Al Asqa. I personally believe that the Palestinians are in a pressure-cooker from the Occupation—any insult or rumor may be the straw that breaks the tense truce. 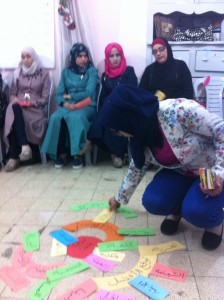 I do know that demonstrations are happening in Bethlehem, Hebron and Ramallah daily. Settlements and Israeli military presence grows daily. In the 5 days Jonathan and I have been here, there have been as many killings. In the last 4 weeks there has been about 8 Israeli deaths and 60 Palestinian deaths, most by soldiers. On Tuesday we heard that Israel is refusing to return the bodies of the dead to the victims’ families. This incited large crowds to take to the streets and caused riots and tear gas. About 50 in Hebron were taken to the hospital. 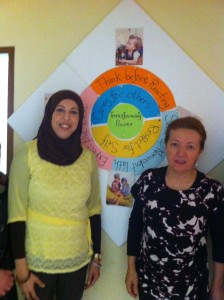 I want to be a faithful child of God. I believe this land is homeland for Jews and Arabs. The Jews that we meet are wonderful. The Arabs we meet are hospitable. I cross the lines, but they usually do not. In the last 4 days in Hebron I’ve visited five AVP groups, 3 in the community and 2 in a middle school. Wow. How amazing to hear these women’s stories. Two groups of women have finished a first and second level workshop. (Each AVP workshop is about 20 hours). The women that met in the South Hebron library are 25-45 years old and have between 6-11 children. I kid you not, 6 children minimum. I asked them how things have changed for them after taking AVP. They say:

A second group of women met in Tel Rumeda where settlers have moved in and regularly harass Palestinian families. These women seemed more worldly and educated. They say: 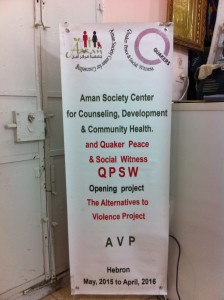 The group was palpably joyful, eager to learn. They had a conversation about reproductive rights. After AVP the group is continuing to discuss UN Declaration of Human Rights. How exciting is that? We are assessing is when to offer trauma and healing workshops. The goal of many Trauma healing workshops (HROC in Africa) is to heal wounds between tribes, after severe violence. Can we do HROC in the midst of ongoing violence? Most Palestinian facilitators don’t feel safe leading a group of Jews and Palestinians. Jewish settlers are so feared that if AVP leaders are working with Jews (therefore maybe settlers) they won’t have respect among Palestinians– they might even put their life in danger (fearing reprisal from settlers). 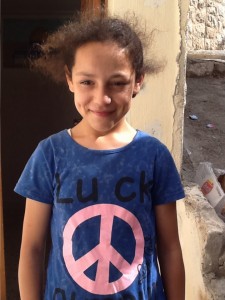 Jonathan, Miriam and I went to visit Nasreen, the widow of Hayshim. Hashem al-Azzeh worked as a translator for Friends in the past. He had a heart operation last month. Then last Thursday there was tear gas spread along the street in Tel Rumeda, near his house. After exposure to the tear gas, he collapsed. The ambulance was delayed for 30 minutes and he died. Nasreen and Hashem have four children, ages 17-5 years old. The 5 year old has been crying every night, the 12 year old is aggressive and acting out. We prayed and listened to Nasreen’s story. The settlers offered to buy her house for $20 million. She refused. Some settlers celebrated happily after Hashem’s death. I asked how do you stop the hate? I mentioned how hard it is when settlers do crimes to keep your heart open. I know the settlers are above the pale, how do you show to your children that we are all humans? We pondered the difficult road to peace.