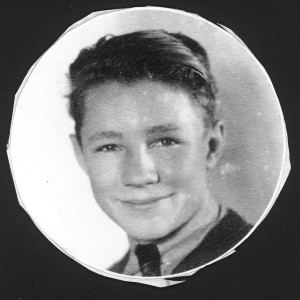 My father risked his life several times as a pilot in WW II. I think of him often now that he has left me, left this earth. My father traveled to see the marvels of the world, and loved returning to his home town where he lived for 85 years. My father loved wild goose, venison and raw oysters. He was an armchair environmentalist, so dogs became his devoted companions.

My father was an athlete, a conversationalist, with a laugh that shook his whole torso. He thought of himself as a genius- telling me that he was off the charts when he was given an IQ test in school. When his Quaker friend, John Hawkinson entered the living room wearing tangerine slacks, Dad eyed him dubiously, and with aplomb pulled out a pair of sunglasses to inspect him with. Dad was a lot of fun. But today I’m reflecting on the contradiction of being a committed Quaker and joining the army in wartime.

Dad never talked much about his service in the war. He enlisted at age 20 and trained to be a pilot. I didn’t even realize he was responsible for bombing much of Germany. Soon after the war he let his pilot license expire, maybe the war tainted the joy of flying. He told me that being a pilot came in handy to impress popular women. He once did a loop in a two-seater plane, taking Louise out for a spin. When he pulled the plane leveling it out, he noticed that Louise wasn’t in 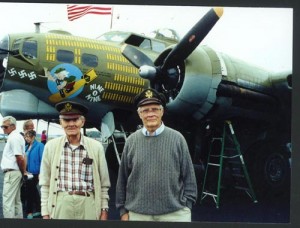 her seat at all. Instinctively he glanced down, out the side window, just in case. In case what? Louise had jumped? Soon Dad found her curled up underneath the cockpit. He was a daredevil.

The earliest memory I have of Dad speaking about being a pilot, I was 10 or maybe 9. We were driving home from school out in the fields of harvested corn near the Chesapeake tributaries. The air was crisp, I was sullen about increasing demands that I help do housework with 3 younger sisters underfoot. The clouds were slung low. The air was full of Canadian geese honking in the distance. Dad slowed the car and pulled to the side of the road. I looked for danger. The wind had picked up and buffeted a trash bag in front of the car.

“Look at ‘em,” Dad said. With a glint in his eyes, he motioned.
There a flock of 15 geese were descending into the field, the field that last summer was stitched in corn. These geese slowly circled down, their mighty wings hooking the air.

“I love to see how they bank against the wind. Watch them pull the throttle. Webbed feet stretch down to brake. Now they flutter just a few feet above the ground.” I watched as one group after another landed just a few feet from each other. Maybe when they were just learning to fly they did some crash landings. Maybe brothers would misjudge and land on top of one another.

“They know how to work the slats. Watch that one.”
“Yea.” Their agility for a fat goose was amazing.
“What slats?” I asked.
“Slats are extensions of the airplane wings. They increase the drag. You pitch the nose of the airplane up to slow down. Landing was always the best part of the flight. The problem was in the war, I was so dag tired at the end of the day. I had to rally all my energy to land smoothly.”
He gave a nod of admiration to the geese. He mentioned briefly that he had flown many flights (20? 30?) over Europe in WW II. He knew he was Quaker, that Hitler was an enemy to the free, that he was fighting violence with violence. He was reconciled to participating in the war: he was just 20 years old. He didn’t fly much after his discharge in 1945. He came home in uniform, a 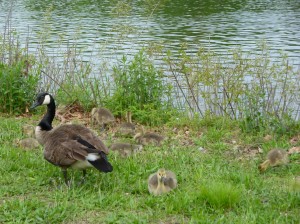 war hero, and got a lot of free drinks. He never untangled the lessons of war for a disgruntled 10 year old. But he admired the savvy of the wild geese: who fly in formation, who travel thousands of miles, who wheel gracefully through the December skies, who descend and land with their sophisticated navigation. I got it: he passed it on. We both shared recurring dreams of flying off the ground.

My Dad was smart and cocky and a good pilot. He loved learning from animals. He loved to move through space. He loved me. The geese are a testimony to lifting off the constraints of the earth; of the extraordinary feeling of going beyond what is earthly possible, and then using all your powers to land safely after flight. What deeper mysteries are there?