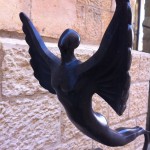 Come walk with me in Jerusalem and I’ll paint a portrait dabbed with history, blood, and desire. When you visit the Old City use artistic nimbleness. The streets are paved with pale limestone blocks, some as big as the pillow on your bed, shiny and smooth.

I walk down el Wad Street in the Muslim Quarter of the Old City, it’s also called Hagai street by Jews. I say “Saba al Kier” (good morning) to Arab shopkeepers, but when I turn the corner I’m in a Jewish section so I wouldn’t speak Arabic. I can easily offend someone. I am often in need of forgiveness in these narrow hallowed streets. 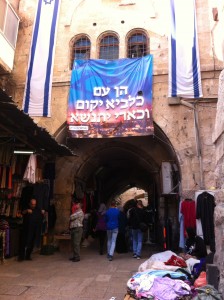 In Jerusalem, on Oct 3, 2015 a double murder sparked a wave of violence. Nehemia Lavi was murdered while coming to the aid of  Aharon Bennett: both were stabbed to death. I stood among the shops where they were murdered, between Holy City Souvenirs and Abu Aziz candy shop. A building arches over Hagai/El Wad street—surprisingly it’s a Jewish community center and has served as a synagogue for over 100 years. Yitzhak Rabin’s parents met here. El Wad/Hagai Street is an access road for both religions. For Muslims, it leads to the gates of the Temple Mount. For Jews it’s the route leading to the Western Wall. About 1,000 Jews currently live in the Muslim Quarter. 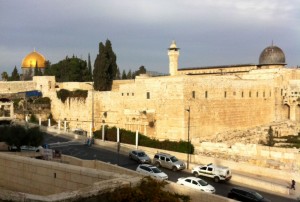 Many Palestinian supporters see Jews as colonizers. To me Temple Mount has a history with Jews and Palestinians. Currently the Temple Mount is the land on which is a mosque called el Aqsa, and the Dome of the Rock. When Umayyad Caliph Abdel-Mali built the Dome of the Rock in the 700s, “some reports indicated that the Jews were filled with elation. Some even believed that this Islamic shrine was the third temple.” For a century, Jews had full access to this holiest of sites.

Jews are not invaders–they settled in this land more than 3,000 years ago. Shlomo Avineri says it’s unfair to recognize “one national movement (Palestinian) and the other as an imperialistic entity (Israel).” This view asserts that “Israel will end like all colonial phenomena—it will perish and disappear. Moreover, according to the Palestinian view, the Jews are not a nation but a religious community, and as such not entitled to national self-determination.” 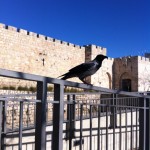 No one is sure the exact spot the Jewish Second Temple was built. Palestinian leaders are not blameless. Arafat denied that the Second Temple (destroyed in 70AD) was at the site Holy Mount, casually claiming, “that Temple is somewhere else.” Neither do the Palestinians want any archaeological digging there. The Western Wall is a remnant of the original wall around the Second Temple. The large ivory stones are weather-worn. Despite the metal dividers, the reverence and humility of people praying and touching the wall is graceful. I put a prayer for my family on a tiny piece of paper in the crack of the wall. An Israeli refrain says: “There are people with hearts of stone, and stones with hearts of people.” 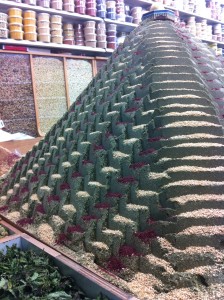 For most Jewish leaders and rabbis visiting the Temple Mount is forbidden. Since 2005, after settlers were removed from Sinai and later were vacated from Gaza, a movement of observant Jews persists in visiting the Temple Mount daily. I find it hard to believe, since I thought this was the one place where Muslims did not feel the boot of the Occupation. This is a puzzle, this patch of land, now whispering in our collective story.

This December is particularly cold in the Holy Land. My hands are numb by the time I reach Ramallah. My apartment sits in the midst of the Kaykab Garden. I watch the doves circle above from the rooftop to the cedar trees. The fluttering wings pour beauty into the aches in my soul. I ask the birds if Jews and Christians and Muslims could live in harmony like trees on the edge of the field. Could they bloom together, sharing the same fertile valley? Fruit trees blooming seem almost a memory, just a faint fragrance in the breeze. Harmony among humans seems fragile to me. I watch a tremulous sky for rain. A civilization, like a sunflower grows, the petals fade, then wild winds of winter blow at the core. Jews and Arabs survive the harsh climate. Here both peoples plant orchards of figs. In the terraced ground grows a plot of wheat. This land sings a lament of impermanence and immortality.