Looking for a Cup of Water in a Religious Desert 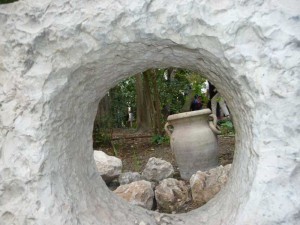 Our group met with a one of the founders of Sabeel, a Palestinian Christian group committed to nonviolence and standing with the suffering of the Palestinian people. Sabeel means “the way.” In ancient times in the arid Palestinian land, a traveler would find an urn of cool water and a cup in front of many homes along the road. Thus ‘sabeel’ means both “the way” and “a spring of water.”

We heard the Sabeel founder share passionately how the war of 1948 or Nakba—meaning catasrophe in Arabic—was shattering for Palestinian Christians and Muslims alike. She was 12 years old in 1948 when, “one day I went to bed in Palestine and the next day I woke up in Israel.”

The Nabka, manifested itself like an earthquake in three ways:

She feels that all parties in Israel must be compassionate, share the land, and allow religious tolerance. This Christian Palestinian feels as much love and desire to care for the land as any Jew. She said, “If Zionism means coming home, I’m all for it. If, however, Zionism means uprooting of a people, then I’m against it. I hate it.” 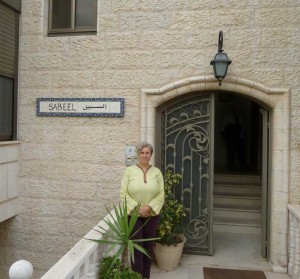 Our delegation was deeply moved by this woman’s pain. She has suffered greatly and told us stories of how she has learned to hate the sin and love the sinner. She described a liberation theology from a Palestinian perspective, outlining four central points:

One story during the 1968 war exemplified this theology. She was living in Haifa and had befriended a Jewish immigrant from Syria who was a Jewish Arab and she is a Christian Arab. Her Syrian neighbor’s son was drafted by Israeli army in this war and was sent to the Egyptian front, the hottest area of the fighting. She explained that an only son in Arab cultures would never be drafted, so as to maintain the family lineage. She was so distraught for her friend that she promised to pray every day that her friend’s son would return even though he was fighting against the Palestinians. She cried bitterly when the Palestinians were defeated in 1968 and she rejoiced when her neighbor’s son returned home safely.

The separation wall viewed from the Promenade south of Jerusalem