Living in a Bubble 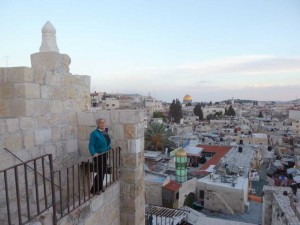 As I contemplated what my Christian Peacemaker Teams delegation tour would be, I hoped that we would be exposed to a full range of the human experience in Israel-Palestine—and indeed we have. We’ve heard from Israelis spanning the whole political spectrum, including:

And we’ve heard Palestinians tell their stories, including people from: 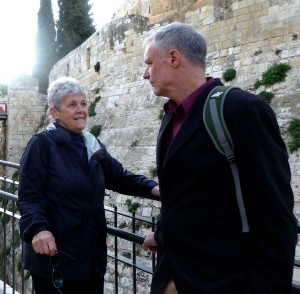 Two Vignettes
Minga and I had lunch with the mother of one of our Cambridge neighbors who from her childhood had dreamed of living in Israel. She was finally able to move permanently to Jerusalem 11 years ago, taking up her 5th career as a tour guide. Living most of her American life in Washington DC, she keeps current with the liberal Haaretz newspaper and the International Herald Tribune. At times her US culture spoke more loudly than her Jewish identity. But when I asked how she and many Israeli people like her support the policies that have so disproportionally disrupted life for the Palestinian people, she responded, “because we have to, we have no other choice.” I am so perplexed with how people all over the world, as individuals and among small communities, are so often generous and loving. But, when faced with the “other,” particularly those with whom we have little or no contact, that love and generosity easily turns to fear and even hate. That warm, openhearted people translate that fear and hatred into total, unthinking support of brutal governmental policies, all for the sake of so-called “security.” I experienced this most directly in 1982 when I and five other young adult Quakers rode our bicycles on a peace pilgrimage across the United States during Ronald Regan’s nuclear arms build up and saber rattling with the Soviet Union. The contrast between the US military machine and all those people who took us into their homes and hearts, even when they disagreed with our politics, was astounding and still gives me hope. 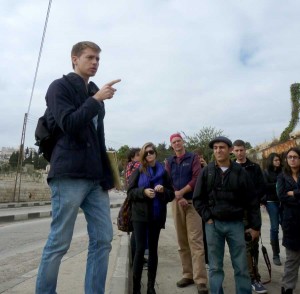 The second vignette occurred on our first day in Hebron. Our delegation joined a tour of the Israeli-only section of the old city with a group of 30 college-aged Jews, mostly from the US, who were participating in an orientation session before beginning year-long internships at various locations throughout Israel. The tour was led by a member of Breaking the Silence, a group of former Israeli Defense Force soldiers who tell their personal stories of how the continuing military occupation of the West Bank dehumanizes both Palestinians and Israelis and can never bring peace to the region. At the junction of what had been Hebron’s main street and large wholesale market, but is now a ghost town on what is called a “sterile” Israeli-only road, one of the Israeli leaders of the orientation group challenged the Breaking the Silence tour guide. We stood there for nearly 45 minutes listening to these two very articulate Jewish young men speak passionately from very different directions about how to bring peace to the land. I did not hear anything particularly new from either of these men, but I am sure that more conversations of this type, especially among Israeli Jews is critical. I was also pleased that the orientation program included such a controversial tour for these young people, who will certainly be part of shaping whatever change the future brings.

The Bubble
It is my experience that Israelis mostly live in a bubble. The Israeli standard of living appears to be equal to or even better than the US. By and large the Israeli Jewish community is unaware of the day-to-day hardship of life in the occupied Palestinian Territories and goes on with life in nearly complete isolation from the non-Jewish population. In order to preserve a Jewish state, there must be a Jewish majority. At present, combining the peoples of Israel proper with the West Bank, the Jewish population is about equal to the non-Jewish, mostly Arab Palestinian, population. If there were now one state made up of Israel and the West Bank, there would be no Jewish majority. Israel needs more cheap land to settle its growing population. 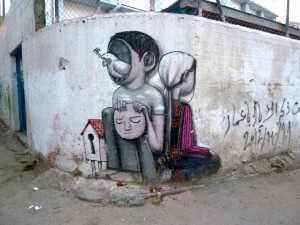 Palestinians speak of the 1948 formation of the state of Israel as the “Nakba,” the catastrophe. The key has become the symbol of the “right of return” for the Palestinian families who are still being forced out of their homes in what the Badil Resource Center for Palestinian Residency and Refugee Rights calls the ongoing Nakba. In 1948 the Palestinian families believed they would be returning in a few weeks or months, so as they left they took the key to their homes with them. The religious Jewish settler told us that the Palestinians weren’t really forced out, they left willingly because their leaders told them, “don’t worry, we will forcibly drive the Jews out of your homes and push them into the sea. After that you can return.”

I am struck over and over again by how we become so embedded in our own reality that we see what we want to see and then create narratives to justify what we think is true.