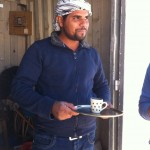 So Jesus lives in Palestine. He’s born a Jew in Bethlehem and becomes a rabbi in Nazareth. He tries to break the chains of the Occupation and three years later he’s killed by the Occupiers in Jerusalem. It’s all so real for me. But a whole new chapter in this story of liberation was unveiled to me in Jericho. Jericho is 4,000 years old (at least) and is 250 meters below sea level. It’s moniker is Jericho: the oldest and lowest.

Jonathan and I took a small bus (size of a van) to Jericho which is due east of Ramallah. The carved terraces were steep and breathtaking, Two-story towers peeked from the thighs of the hillsides. These granaries, many now uninhabited, housed Palestinian farmers. The families would keep crops or livestock in the first level and sleep on the top floor during the harvest season.

Jericho was a more pleasant trip than any others, mostly because there were no check points. Israel took down the checkpoint from Jerusalem to Jericho in 2009. (Currently in the West Bank there are 600+ checkpoints, and other temporary ones). We passed settlements who use the rich soil and springs for agriculture. How much warmer Jericho is than Ramallah. The date palms and citrus fruits were bearing fruit. Roses and jasmine floated in the air. On a hike following the old route to Jerusalem we saw pelicans, quail, mountain goats and hydraxes. A hydrax is a fast, furry animal the size of a beaver and related to the elephant. (Yep, size isn’t everything.) Hydraxes are trapeze artists scampering up and down the cliff walls.

We got to the Dead Sea, a 10 minute drive from Jericho. We walked round the excavation of ancient Jericho where archaeologists have dug up buildings, showing religious life there 10,500 years ago. We saw the ruins of Herod’s three winter palaces (an extravagant king), the land was given to Herod by Cleopatra. We sipped sage tea with the tour guides, being the only tourists around. We refused to buy necklaces which angered a Bedouin man, who walk away from us in disgust. On the roads taxis honked at us, amazed that we prefer to walk the streets. We were the only tourists without a tour group. Hiking in the hills, three Palestinians offered us a donkey taxi.

We walked from Herod’s palaces up the famous Wadi (canyon) Qelt for 8 kilometers to St. George’s Monastery, perched 100 meters up the side of the canyon. This is the ancient sites of the desert fathers and hermits working the land and praying in the dessert. St. George has 5 monks currently living there. We also saw smaller chapels piercing the walls like stone tacks, and large caves for inhabiting. The air was singed with mystery. Forty meters above the Wadi we encountered the old Jericho road. For 2,500 years the aqueducts and road hug the mountainside. The dirt road was 1.5 meters wide, with evidence of past rockfalls. If we met bandits along the way, there was no way to escape. I put on my pilgrim curiosity as we met 2 Beduin laborers fixing the cliff buildings, and a shepherd with his large flock of goats foraging the cliffs.

There are over 50.000 Palestinians in the Jordan Valley and just 10.000 settlers. However, 44% of the land is designated an Israeli military zone and 50% by the 37 illegal settlements. Palestinians control only 6% of the land. Israeli companies control the water resources in the area. Settlers in the valley receive almost 33% of the amount of water available for all Palestinians throughout the West Bank. The Jordan Valley lies alongside the Judean Desert. 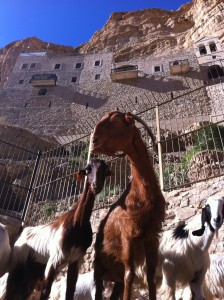 Jesus’ ministry was done walking. To travel from Galilee to Jerusalem you travel through Jericho. The stretch of road was infamously treacherous the last 10 miles to Jerusalem. Jericho, city of Palms, was/is an oasis. The canyon with it’s brittle sun finds solace in the many springs near Jericho. a journal from a Pilgrim to the Qelt Wadi, dates back to 333 C.E. Jericho with its confluence of pools and sharp rock has had religious significance for millennium. I joined these desert seekers, searching this day for answers to the lock-down of the Occupation, the thorny reality of Arab and Jew Living as enemy. 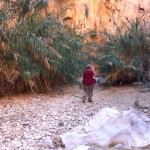 Dear Holy One, I am just a Pilgrim walking in the Shadow of Death. Please shine your spirit and guide the way. My pleas echo along the timeless canyon walls.

Three kilometers down from St. George’s Monastery is an ancient Inn. This is the location of the parable of the Good Samaritan.

“A man was going down from Jerusalem to Jericho, and fell into the hands of robbers, who stripped him, beat him, and went away, leaving him half dead” (Luke 10:30).

A priest and a holy scholar passed the man by, he was naked and unconscious so they couldn’t tell what tribe he was from, and they had to protect their roles, keepers of the faith. A Samaritan came by, an Arab, and carries the man on his donkey to the Inn. Which one showed mercy? Jesus, our rabbi, teaches us how to break the Occupation: give aid to those who need compassion, even if they are your enemy and if you put your honor at risk.