What land that recently fought the Brits for 3 decades calls the violence and degradation: the troubles? Ireland has fought off many invaders before the British such as the Celts and the Romans. Isn’t this a remarkable place for the International Alternatives to Violence Conference? Irish hospitality and warmth is notorious. What kind of people can be so cheerful, curious, musical and child-loving and still be fighting for their dignity and freedom? What does that do to a people? Is there any reason that the Land has its share of Ire and thus Ireland? 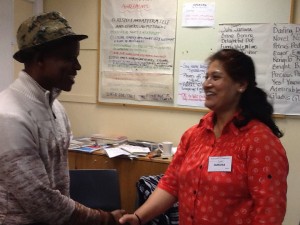 Their native peoples did not fight off the bigboned Celts when they moved in in the 5th century. But they staked out fields and stone circles in discreet places like the rocky pennisulas and western islands. Some say the petite smaller race became reclusive enough that they lived underground, or went on disappearing islands like Glastonbury in Wales. Thus the belief in fey people or the fairies.

I came to Ireland full of curiousity and some wonder. Would I meet Samuel Beckett’s absurdity, or James Joyce’s verbal paintbrushes, or Mairead Maguire’s peace efforts? Ireland: so famous for pubs and story-telling and luck. The Irish have put their stamp in Boston. Ireland hangs onto western Europe by a fingernail, the pinky finger. It resists incursion from the UK–fighting its brawny neighbor for Irish autonomy and self-rule. It is awash with mists and rains, stacked with rocky crags and engulfed by the northern sea. The moon seems to rule as much as the sun in Ireland. The music afloat in the air softens the stiff Catholic collar.

My Nonviolent workshop on Discernment had 20 people, from 14 different countries including Korea, South Africa, Columbia, Australia, Germany, Sudan, and Nepal. All these people work actively in the AVP community getting prisoners, youth, drug lords and other perpetrators to change their violent ways. We examined discernment as an individual process as much as a group process.

How can each of us continue growing in discerning our path? How can I change my use of words, of time, of actions? A Ugandan Friend said that we need to listen behind the words, or What do we perceive that is unspoken. What is my daily commitment to transforming?
I learned the difference between changes I make based on convincement verses personal change that I make due to conviction. I learned that positive changes that I make work if I use alternating techniques of experimenting and then reflecting on what occured: action and analysis. We are AVP scientists in the lab at work.
I have heard of mythological figures such as Queen Maeve, Cuchulainn, and Grainne, the Irish she-king of the sea. I felt we were taking the next step in advancing humanity out of the cycle of endless wars. Write this day down in the Irish cronicles when a small group of discerning, fun-loving, commited people came together in Dublin to offer a non-violent path.