The terrain going southeast from Chiquimula is a mix of chaparral with valleys of cultivated fields. Guatemalans here dress in western style, with a Butch Cassidy swing. The harvest is good here with melons, watermelons, fruit trees, honey, and ofcourse lots of maize. I certainly have had some excellent dishes in the form of stuffed eggplant, cinnamon porridges, and nutritious caldos (soups). Chefs here have an original way of making empanadas. I was served an appetizer of a fritatas, complete with a bit of corn husk, wrapped around the fritata like a ribbon. They have a technique of growing melons in rows, and then covering the entire row in plastic, to protect it from predators, including the penetrating sun rays. The temperature is hot now, reaching a high of 75 degrees but in July the heat is truly suffocating. Rains come in May which they call winter.

Martha and I went on Jan 15 to visit the festival of El Cristo Negro in Esquipulas, about 40 kilometers south of Chiquimula. The Central Park is huge, with whitewashed walls and wide sidewalks. And there were pilgrims parked everywhere, many with traditional dress: 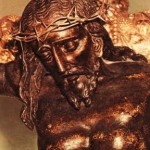 satin skirts and tassles hanging from straw hats. Believe it or not, the entire park looked like Occupy Wall Street. Canvas and industrial plastic hitched up in makeshift tents covered the park. Women had small fires going out on the sidewalks, heating a pot of coffee, or toasting small tortillas on a flat pan. Everyone seemed to be enjoying themselves with little alchohol.

The ornate basilica with walls like a fortress, dominated the park. On one side of the basilica was a courtyard, where a priest sprinkled and blessed the line of pilgrims. The other side had a line of people waiting hours to get a upclose viewing of the Cristo Negro, a statue at the altar. On the other side was a enclosed place to light candles, and there were thousands of candles. The pavement of rounded stones was slick with wax. The small chapel held the wishes of so many people: those hoping for a new life, for a miracle, even for a loaf of bread. The smoke and the incense were intoxicating: I floated through the aisles of candles as if breathing on another planet. Some say the original christ in the chapel was not so dark-skinned, but after time 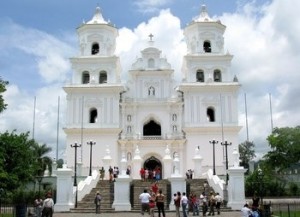 being exposed to the resin and smoke of such offerings, the statue was black-ened. El Cristo Negro is attributed to have cured many supplicants: the poor, the sick, the desperate. Even an archbishop was cured of cancer here. The story of the Black Jesus orginated 400 years ago.

Before the conquest of the Conquis-tadors, the town of Esquipulas, located near the crux of El Salvador and Honduras, was inhabited with about 300 Indians. The missionaries who arrived in town were “very aggressive”, according to Abbot Gregory Robeau. They persuaded many locals to convert to Catholicism: conversion being another form of conquest. Anthropologists have found that when an indigenous group looses its religion, the loss slices through its culture, and within a few generation its language is lost. Sometime soon before the turn of the 16th century, converts asked for a crucifix of Jesus for their prayers. And so a petition was made to the Bishop in the capital Antigua, for a crucifix. An artist, Quirio Catahyo in Antigua was approached about the need of the Indians of Esquipulas. In 1594 Catahyo sculpted a crucifix in memory of Saint Francis. To pay for the cost of the project, the locals of Esquipulas planted and sold cotton.

Indians then traveled by foot from Esquipulas to Antigua to carry Jesus back to their town. They were amazed at the beauty of their new possession. Along the way home, the group passed through various towns, people everywhere were awestruck by the image’s charisma. As a result, the crucifix spent time in each village, prolonging the trip until March 5, 1595. Since then there’ s been many cures from the faithful who visit El Cristo Negro, including Pope John Paul II who came to ask for a cure for the suffering of many. If healing is happening with smoke and wax and travelling to a shrine, who am I to dispute it?