Ceasefire Is Not Exactly Peace 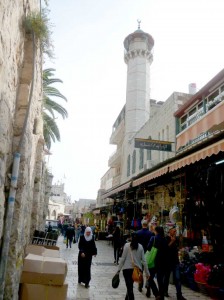 Jonathan and I started our journey to Jerusalem when we first agreed to go on the Christian Peacemakers Team. Then we read books together, and studied current events in the Middle East. We sat down to have a meal with friends who know the region well. Some Friends feel that Quakers have no role in mediation, others believe in the two-state solution, and some state that we need to stand in solidarity with Palestians, join the boycott, divestment to stop the aparteid state.

The drama of our plane trip came when we were delayed from entering in Tel Aviv by over 2 hours. I was hoping the airport wasn’t shut down due to rocket fire. With Hilary Clinton’s arrival and Egypt’s crafting a ceasefire, we are relieved that there is dual agreement to stop the rocket-fire. Last week the Hamas military leader, Amhed Jabari was killed. Palestinians sent off a series of rockets. Israel ‘s Iron Dome missile defense system can detect when projectiles will hit populated areas and can interrupt them mid-air. Israel’s death toll as of today is 5. Palestinian deaths are up to 180 this week with the Israeli government’s Pillar of Defense. (In Hebrew the term is Pillar of Smoke referring to the Pillar of God that led the Israelites during their journey for 40 years in the desert with Moses.) 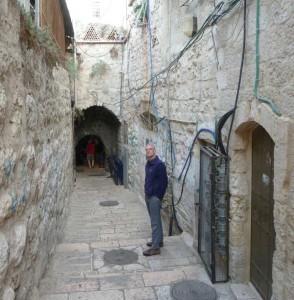 We arrived through the Gate of Damascus last night. We descended down the smooth stone  steps under a crescent moon. Shopkeepers were packing carts, the sheep butcher was scrubbing his floors. I felt amazement to be alive, a bit giddy, surprised that the trip had succeeded. From our orientation we were told to be quiet going through customs, and not to speak publicly about the purpose of our trip. Thus, I felt like I’d snuck onto private property past moats and alligators.

In the morning I arose at 7 am to walk up and down the narrow streets of the Old City, all blonde stones.  The smell of cumin and the  meowing of hungry cats  struck me. I followed behind school children, many of them chattering in Arabic.  We went to the Garden Tomb (where some think Jesus was entombed).

For dinner we met with Mordechai Vanunu, who was the whistle-blower in 1986 of Israel’s clandestine nuclear weapon industry.  He was imprisoned for 18 years, in solitary confinement for 11 of them. He has an important story and feels that his voice and freedom have been curtailed. We (CPT) gave him a sweet honorarium sincbe he can’t get a job. He reminded me of some of the men out of Concord prison with a bad CORI report, cast aside by the workforce [Below, we have posted a 60-minute BBC documentary on his full story]

I am reminded that I can’t fix the complicated problems here; we are practicing a ministry of presence. We are here to listen and be compassionate in the midst of volatile emotions and rigid positions. With someone like Mordachai how can we honor the truth but find a harbor of love and understanding?