Learning AVP When Enemies Are Everywhere

How are prisons violent? Humans learn to reciprocate love and leverage power with each other. Like lumbering bears, we grow every day. Prisons stunt growth. A herd of humans can become a stampede that tramples each other. Humans howl—when threatened we snap our teeth. Violence is taught—sometimes on Main Street. I can assure you—violence is taught in prison. Ahhh, but, violence can be unlearned, in prison and anywhere. 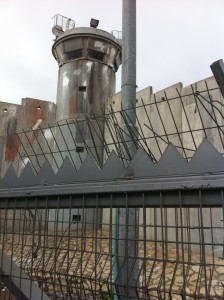 I went into a state prison for three days last month. Julie runs the Alternatives to Violence Program (AVP) at NECC prison and she asked me to offer a Workshop on Anger Management. Wow, what an explosive topic. We talked about how your blood can boil (anger thermometer), how music or shooting hoops can take the edge off (cool-down) and at what point is anger so consuming that you need to take a break (anger escalator). Taking a voluntary ‘time out’ is quite different than being punished with solitary confinement (aka put in the hole).

Julie and I worked with 2 inside facilitators, Ishman and Froz (disguised names). We all create appealing adjectives such as Melodious Minga and Invincible Ish. Or in prison you might meet Irrepressible Ian or Fantastic Froz. We all laugh as we announce our names these three days together. We learn nonviolent communication and how to let go of a grudge. We do role plays in a boxing ring. We play dodge games—it’s fun. Sprinkling laughter among the tough reality makes the time fly.

We practiced a Trust Walk. Half of us walked without seeing through a minefield, trusting our guides for help. Building trust is the opposite of blaming and shaming.

One guy Hip Javi said he prevented violence by murdering someone. His sister was being beat up by her boyfriend so Javi killed him. Hip Javi says that by killing him he was willing to suffer for what he believes (protecting women in his family). He will try AVP in certain circumstances, but to protect vulnerable innocent people, he may kill again. I listen to his honesty. I respect him even though I disagree with his decision. I cannot judge Javi’s intention even if his actions were damaging. Here are some quotes from inmates.

A rule in prison is not to share too much.
“If I break the rules, I go to the hospital. When I stand up for myself, I’ll go to the hole. Even when I’m not in solitary, I’m always alone.”

“Everyone is an enemy in prison. AVP taught me to see no enemies. First I ignore enemies. Later [in AVP] I ignore the dynamic that there is an enemy. Live with honor. Die with dignity.”

Fear is better than respect.
“So as not be a slave from cradle to the grave, I used to instill fear in others. The fear came back to haunt me. I get behind these bars and all I think of is my fuck-ups. I beat someone to death so now I live my life in a tuna can. Is a life-sentence obligatory? I don’t ask for the pursuit of happiness, just the pursuit of dignity.”

AVP offers respect. The prison system is broken. It’s worse than broken. Michelle Alexander’s book, The New Jim Crow, illuminates how prison propagates more violence. The courts convict the wrong people. The innocent people learn from the gang leaders. The mental threats and insults increase when folks are locked up unfairly. Emotional violence and intra-personal violence increase to a severe level that no child of God should tolerate. At the court level the government inflicts violence, at the prison level guards inflict violence, plus the community allows the stealing of civil rights. At the psychological level people know that punishment doesn’t succeed in the long run. We can’t just put a social being in a toxic environment where punishment dominates and expect prisoners to learn love and respect.