AVP cradled by the Ipala Volcano

The workshop of AVP glided into the lives of Magdalena, Marco and Eunice like a stream of clear water in the dessert. I want to share here with you the thrill of an AVP (Alternatives to Violence) workshop, held at a Quaker school, with 16 Guatemalans and one Bostonian 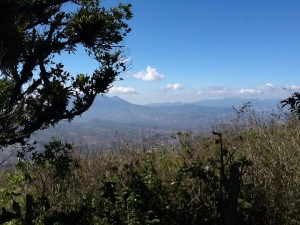 participating (that’s me). Friends Peace Team was introducing AVP to the municipality of Ipala Guatemala, nestled beside a volcano and a deep lagoon. Guatemalans entered with their bright, shy eyes; long ebony hair, some with cowboy belts. One youth with a long braid had a beaded barrette as if a quetzal had  flitted into the room. They studiously carried in their thin notebooks and pens. (These Guatemalans came more prepared than an AVP I taught in Philadelphia, where the participants brought with them yoga mats.)

We asked “How has violence affected your personal life?” the stories Eunice and others told tenderly were numbing. “My father was collecting honey in the countryside when he disappeared and we didn’t know what happened to him.” “My cousin was attacked by a gang, shot twice, and when he was taken to the hospital they didn’t accept him.” “My daughter was raped at 15, she came home bruised in shock; and it still feels like it happened to me. this man was stalking me for years at my first job in a small village. Even though it happened to me 15 years ago, I still have nightmares, and that creepy feeling of someone watching me.” By the end of the go around, three quarters of us were crying.

In Guatemala these stories are common and people suffer from many somatic problems. Along with Honduras Guatemala has many social burdens, high malnutrition, increasing narco-traficking, low adult literacy, and family abuse. We ended giving many hugs, whispering in each others’ ears, “You are not alone.” “We are here to help each other.” “We are learning how to stop this violence that you suffered.”

We had our last day of the workshop at the park outside Ipala called Posada de la Pila. We took chairs outside and sat at the side of the river (called Pila for the lava rocks that made it perfect for scrubbing clothes) . The river tumbled between boulders, a muscular stream with moss covering shallow rocks. Tall trees curled over the ravine, thanks to efforts to protect the environment. Birds, butterflies and unknown flying bugs also participated in our AVP. Our exercises included Crossing the Border, Empathy, and the Gusano (means the worm, but caterpillar sounds better). For the Caterpillar 8 people lined up in a train, everyone with a blindfold except for the first, who was the leader. The facilitators gave the general directions for the caterpillar to move, over a bump, under a branch, or up some stairs. After five minutes the Leader was given a blindfold and moved to the bottom of the line. The next person was the eyes and guide for the 8 people. After 5 minutes another moved to the front until all had the experience of guiding and being part of the train. We asked, “Which position do you prefer? How did trust develop over time even though you often didn’t know who was leading?” The workshop offered me  insights into my own control issues, and doing AVP in another culture awakens me to new ways to communicate. I was touched by a woman who said in the end, that she has been a person that didn’t share the pain of the past, but in AVP she opened up, and wants to share more of herself. AVP heals lives even when living next to volcanos. 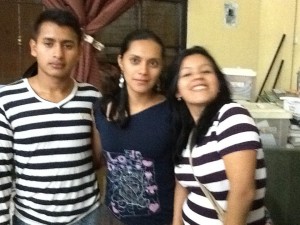