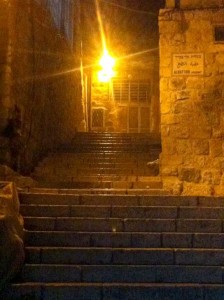 Along with UN General Secretary, Ban Ki-Moon, and US Secretary of State, Hillary Clinton, Minga and I arrived at the airport in Tel Aviv only 3 hours later than expected. Earlier this morning, we sat on the ground at the Charles de Gaualle airport in Paris, likely waiting for these dignitaries and their entourages to enter the country.

After much prepping on what we were and were not to say to the people at the passport control, we said hello and thank you, but heard not a word from the passport official, only a smile. We are staying at a hostel just inside the old city, near the Damascus Gate. We had a quiet dinner with three other people in our group, and now to bed, adjusting to the time difference and getting ready for 5 days here in Jerusalem. Good night, all.