A Jew & a Quaker Work for Justice

Jean Zaru is a Palestinian Quaker who speaks and writes about current life in occupied Palestine. What is a Quaker response? I listened closely as Jean spoke at the RamAllah Friends Meeting last Sunday. “I’m not saying that the oppressed are blameless, but it’s hard to keep up hope.” She says most Palestinians are so intimidated by the arrests, the teargas, the limiting of their movement, that they don’t stand up to the injustices.

“We need to speak Truth to Power. By Power I mean structural power. The powers of domination in Palestine include access to family living in different towns, medical access, and economic structures.” (The separation wall and check points prevent Palestinians from work.) 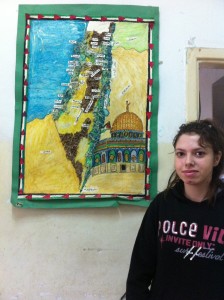 “I find hope in two ways. Hope comes from the courage of people who keep working and creating despite the hardship here. And hope comes from our faith. If we can find hope after the resurrection then we can find it now. I won’t be reconciled to hopelessness. The prophets like Micah tell us that God requires us to love mercy, do justice and walk humbly with your God. Justice is important. We all need to respect human rights. Mutual rights will bring us to the justice that God requires of us.”

Tamar came to live in Israel 10 years ago and is raising two children in Jerusalem. I wanted to talk with her about the school she chose for her kids, a bi-national, bi-cultural, bi-lingual school called Hand-to-Hand. When researching schools, she wanted a place where her children could befriend and understand both Jews and Arabs.

I was impressed that Tamar has chosen to work for an organization which develops renewable energy and water services in south Hebron (like Susiya). She is a Jew who is crossing the border and working for justice in Palestine.

I asked her how she found living in Israel with its unfair policies. She replied how she often feels the discomfort of daily life, “it’s as if I’m approching something, and I’m almost on top of it, but I can’t reach it–I don’t know what it is.” She had thoughtfully reached some conclusions.

She told us that Jews need to acknowledge the Nabka, and sort through how to make reparations. Currently Jewish law says if a school acknowledges the Nakba, they can’t recieve government funding. One step that she appreciates is that Jews and Palestinians together are creating a map of the 400 or so Arab villages that existed before 1948.

She hopes that Jews teach our children (and each other) tools of how to respond to other Jews who are Nabka-deniers. Likewise, Arabs need tools to confront other Arabs who are Holocaust-deniers. 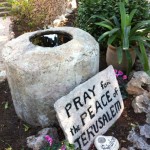 I so appreciated Tamar’s thoughtfulness of how to continue education for Americans about the Palestine-Jewish situation. She recommends 1. more tours of life living in the Occupation 2. disseminate knowledge in local papers, in universities, writing articles on-line. 3. new ways to explain to Congress about America’s policy towards Israel. She believes we can make the case to conservatives that the Occupation is bad for our economy.

She also wants Jews and those concerned about Israel-Palestine not to discredit those who have different tactics. She approaches change by offering a ‘big tent.’ BDS is a tactic, dealing with refugees, culturally boycotting, or water rights takes different strategies. The important thing Tamar concludes is that everyone needs to do something, we can’t hide from this vortex in the Middle East of a global crisis.