5th Graders Growing Up During the Occupation

What if from the time we are 5 years old, all problems between people were handled with compassion and clarity? At Ramallah Friends School (RFS) children are empowered to address interpersonal problems. And then they take action to follow-up on the problems. 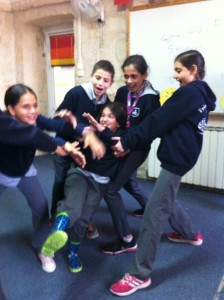 I participated in several 5th grade ethics classes, where the school counselor deftly facilitated working through struggles. All students are encouraged to write any on-going problem with others in a notebook during the week. Often the students don’t want to admit the problem. “I did have a problem, but I forgot what it was, so it wasn’t a big deal.”

The counselor doesn’t let this pass. She draws out the student. He talks about how 3 boys, his friends, kept a secret from him. He couldn’t take part in their game. He was treated as an outsider, with some derisive teasing. At this Quaker school, any student’s problem becomes the group’s problem.

The teacher asks, “DId you see the boys excluding one boy? What did you do to help the problem?” Yes, some students saw it and purposefully figured out a way to include him. No shirkers permitted at RFS, as it teaches social responsibility. 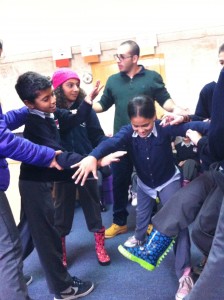 Another week a problem arose, and it appeared that the instigators were from another class. The situation: at break time, children in the class shut the door, blocking entrance to several kids who were outside. A boy defended the action, “it was just a joke.” He was gently asked whether he was minimizing the effect of a blocked door. Someone said, “Two children were ordered to leave and then kept out.” No one admitted to doing it, insisting other kids from another section started the game.

The teacher asserts, “Then it’s your responsibility to go through problem solving steps.”
Teacher: “If your game or joke bothers another, what do you do?
Student: “Stop it. Ask the students to stop it.
Teacher: “The game stops being play when others are bothered.
Student: I did slam the door once.

The process Problem Solving is integrated in the RFS Lower School from K-6th grade. If necessary children from another class are called out of class to resolve the problem. Children are taught to go through 3 steps whenever there is a serious disagreement.
Step 1: Tell the person what they did and how you felt about it. Ask if they can work it out.
Step 2: If the person isn’t willing to work it out, the 1st person says, “If we can’t work it out, I’ll have to take the problem before the group.” Basically it gives both of them another try.
Step 3: The 1st person goes to write it in a designated book: an adult checks in with the student the day of the writing to see if Step 1 and 2 are followed. 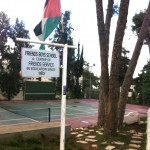 These are Quaker testimonies at work. RFS practices tolerance between religions (both Christians and Muslims attend), class and race. It’s not consistent, and several at RFS wonder how Quakerism fits in the Palestinian context. At RFS it’s difficult to talk about peace in the midst of occupation, an act of war. Here, students practice learning from conflicts. Disagreements don’t fester nor metastasize. Wouldn’t that be a great example for our national leaders, the Palestinian, the Israeli, and the American? 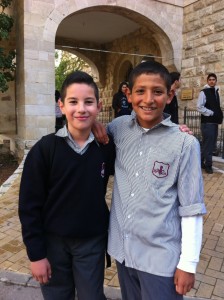 “The conflict between the Palestinians and the Israelis will only be resolved when Israel’s occupation of the Palestinian territory is ended and the inherent equality, worth, and dignity of all is realised. Peacebuilding is a long and demanding path to take, but an essential one.

Quakers in Britain feel called to act alongside others to address the roots of violence. We continue to uphold Quakers in the region and those working nonviolently for peace and human rights within Israel and Palestine. Quakers will continue to challenge anti-Semitism and Islamophobia, as we oppose all forms of prejudice. We long for—and will work for—a time when the deep fear experienced on all sides is replaced by security and a just peace.”