When murder is Holy Ground ? 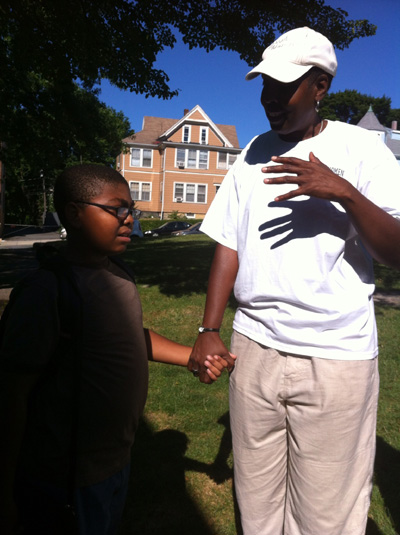 In July humidity hits you like a wall of heavy cream. This July floods, flash storms, and droughts  abound. Heaven, please pour down on us. We live in dangerous times. In that spirit six of us arranged our lives to walk for a few hours near Franklin Park. We prayed at the sites where people have been killed. We bathed ourselves in a balm of liquid prayer.

We ask forgiveness for our participation in a violent culture. We call on green strength. We call it the Walk on Holy Ground.

We started at 9 am at the Bethel Pentecostal Tabernacle. We stood in a circle touched by the terrible bloodshed, aware of immense privilege, thankful to be alive. We stood in the towering building, sunlight streaming off the tabernacle’s walls, children playing outside under the trees. We often begin reflecting why we come.

I had researched names of people that had been mowed 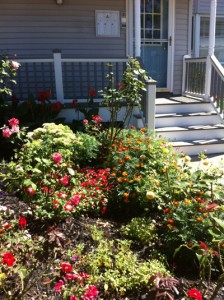 down in that area of Blue Hill Ave. The Boston Globe offers an map to see where the killings have occurred from 2008-2012. Most of the victims are in their 20s. The Peace Institute encouraged us to reflect on Peace: what facet of peace stands out for you? Peace includes facets of courage, justice, patience, truth, and forgiveness. To me I asked God for a discerning heart. Compassion abounds and which direction to go to prevent violence is a hard question for me. Someone asked for forgiveness in the family that refuses to talk to one another. Another spoke of courage to finish a hard project. That too is a part of community. 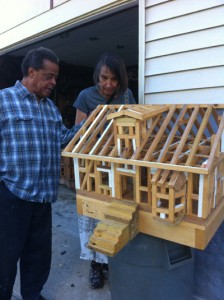 2011 we could stop knowing we honored the dead. We couldn’t stop walking, so we’ve walked on holy ground more than 12 times. Others asked to join us. In the winter when we walked it was unseasonably warm. It seems the days we choose always to be a sunny day.  We usually find a community garden on the way, we are sheltered by some massive trees, our quiet well wishes are punctuated by shrieking voices of children with drooping backpacks. It provided an antidote to despair. We’ve called on Derek, Jamayl, Jewell, Anthony, Chantal and Luis.  There are so many names of the fallen, it has brought me to tears. Yet walking through the streets, we witness a community pulsing and vibrant.

We passed 40 Ames St. where Wilson Alexander, 20 years old was killed. Three others were shot with him, but they survived. We walked steadily, talking in low voices, pointing out a tressle of roses, or a ribbon of broken glass. There was an effigy with a clownish face in a vacant lot. We admired a man building replicas of houses, a raised flower bed, noted the smell of cigar.  We passed by 8 sites, all of the victims killed were in their 20s except for Victoria Paron, mother of two who was strangled at 39 years old by her husband. Often people are killed in 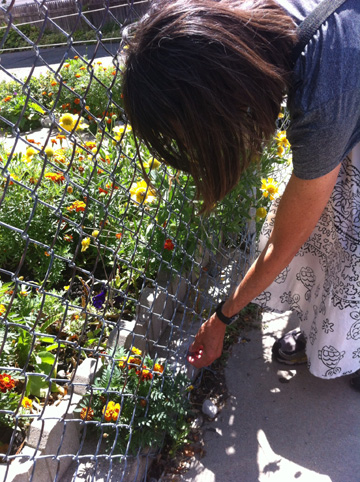 retaliation, but it’s just as painful when the killers end up shooting the wrong guy. We tarried on Floyd St where Ramone Daley, 22, was thought to be someone else and was mowed down.  We prayed that the neighborhood around Franklin Park would heal, that the young would stop vitriolic revenge, that the gang leaders would find a path of peace, that we all would forgive and be renewed. We prayed for Shawn, Besher, Toneida, and Ramone.

We’re sad but also empowered. For each of the deceased we passed a stone, the size of a robin’s egg around our circle. We left the stone at the corner of the place of death. We sent our prayers deep into the ground, the bones of the earth. The Holy Ground. Where the children still shout and chase each other; where the healing starts as a whisper and ends exuberantly, “Hallelujah, I’m alive.”