When is Death a Gift?

It’s now 2 months since my Dad took his own life. He was 86 years old.

I think of myself as a daughter who misses her parent. I don’t think of myself as a survivor like one who’s survived a suicide. Many see suicide as wrong, shrouded in dank and silent screams. But the mystery of suicide was unveiled for our family. Dad spoke openly about wanting to die and that he would do it without our help. 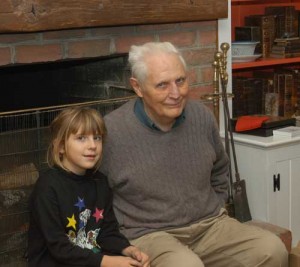 For his family on that August afternoon, he spoke obliquely without fanfare–at bedtime he would take an overdose.I wouldn’t participate in the suicide. Dad taught me about welcoming dying, even though I refused to join with him in his dance with death. I didn’t want to count the pain killers, or put one pill in his hand. If he dropped one, I’d pick it off the floor, but never put it in his hand. Nor did I choose to flush the drug in the toilet. I was glad to be a bystander not joining in the end game.

In prayer I understood Dad’s position, accepted it as different than my own. I checked it out with my Inner Guide and I knew it wasn’t my role to deny my father. He wasn’t much of a complainer during that year he told me he’d take his life. We talked often.He liked the borderlines of science and mystery. What’s dark matter, gray matter and anti-matter. What’s the sky and what’s heaven? What are the 2 wolves prowling in your mind and do you feed them?We had great conversations. He spoke about his inner gleamings of eternity.Emotionally I cheerfully explored with him life and death and even moreso, spiritually.

But physically I would not lift a finger to help him. Not because it’s a crime, but because helping him die would ruin a pact of love. I would never diminish the love we shared. After all, he gave me life. He showed love and exemplified strength. Was I born to give him death? I didn’t participate in his undoing, and so kept the promise. Between father and daughter the unwritten vows are not to give up on life or love.