What is a PeaceBuilder? 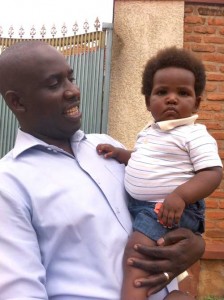 Everyone wants peace, but not everybody works for peace. how does a person move from a passive bystander who favors a peaceful world, to someone who intentionally works actively for justice and peace? To find out I talked to a Rwandan Quaker who’s an indisputable peacebuilder.

Daniel Nteziyaremye is a 34 year old father of two young daughters. He speaks three languages and, like all Rwandans born before 1994, he’s a survivor. As I learned from Palestinian Quakers: Hope is not a feeling, it is an action. Daniel’s life shows that peacework includes your mind, heart and hands. But this story starts with a dark part of his life.

During the genocide Daniel was exposed to dying– he watched people riveted with fear, and witnessed hysterical grief. His Mom was stopped 6 times in 1994 by the Interhawme—they considered killing her just by her looks. As a 13 year old, Daniel and his siblings surrounded their Mom crying and hugging her. With this swarm of protesting children, the militia let her go, saying they’d finish her off next time.

Daniel’s skin is a deep black, his body robust and large-boned. In school teachers would line-up students according to Hutu or Tutsi. But his parents never told Daniel whether he was Hutu or Tutsi. His Dad just told him he was a human being. Daniel lived in the Bugesera district, which was given to Tutsis by Hutus in power because it was undesirable land, breeding many of the dreaded tsetse fly. Daniel didn’t fit the Tutsi stereotype of a thin person who herded cattle.

If you aren’t a Tutsi and don’t know your homeland (like Daniel), the Hutu government assumed you were a spy. Once in 1994 Daniel was surprised by some militia, he was stopped and interrogated. At 13 he was terrified they would kill him. He was let go perhaps because his body-type was not like a Tutsi. But the scars of that time are engraved in him. 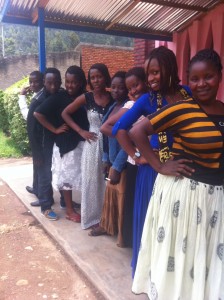 Daniel studied to be a teacher. He got high marks in school, and landed a job teaching sciences. In the university he majored in information systems and management. While studying at the Adventist University, Rwanda switched from a French to English system: so Daniel had 2 years in French and 2 years of courses in English. He joyfully graduated in 2012.

Francine and Daniel married in the Friends church. Neither of them had jobs. He said they spent many days in the beginning of 2013 watching newscasts and finding entertaining movies. He was so frustrated—after receiving excellent grades at the university, no one was offering him a job.

Daniel took workshops offered by Friends on peace, on healing the community, and on creating a just society. He was especially touched by a UK Quaker Service Program called Turning the Tide (TTT). One TTT exercise, called pillars of power, made a big impression on Daniel. Suddenly, a light bulb went off for him: why not analyze his personal problem of not having a job. Daniel began analyzing what are the pillars supporting his problem of unemployment. For Daniel, the first change was to get off his sofa and volunteer in the community. He found an antidote to despair. He spent time working at Friends Peace House, translating materials, setting up computers, whatever needed doing.

“After the genocide, my heart was broken, as well as among all people. Even Hutus were overcome with sadness. Through the Friends church, I did many exercises on grief and forgiveness. I witnessed the pain of my friends whose fathers were in jail. With my peers we learned to express ourselves.” Daniel emphasizes that the attitude of church leaders and the programs in the church changed him. His life of fear was transformed to hope. Then Daniel found himself taking leadership.

Witness to Peace and Justice

“I decided to have a better society means that I have to work for change. I had to contribute. About that time, I noticed the bus conductors weren’t giving customers change when they paid the fare (about 20 cents, 2 dimes). The bus ticket officially cost 18 cents, I saw the conductors just kept the 2 cents. I spoke up to the bus conductor and he denied there was a problem. I spoke to the whole bus, asking the riders (say 20 people) “Do you agree with me, that the conductor is cheating us of our money?”

The bus riders agreed with Daniel. They realized that over time, the conductors were collecting plenty of spare change by pocketing those 2 cents. Daniel suggested a solution, and the riders supported it. For the 20 fares paid, 2 riders should get on the bus for free. The bus driver agreed to let a young student and an old woman ride without paying.

Daniel repeated this advocacy for many weeks on whatever bus he was riding, encouraging bus riders to contribute the change due to them for those not able to pay. Soon, he became well-known among the bus company, and drivers would brace themselves whenever they saw him approach their bus. After many months, the bus system changed their policy.

“We each must start making the change—don’t just think that others will do it.” Daniel tells me, “If you think you’re too small, try to sleep with a mosquito. Imagine how much power the mosquito has in bed next to you. I used to see the problems in our world as big, also I saw our country shrouded in darkness. I know many Rwandans left the country because of the killings.