What Do You Tell our Children? 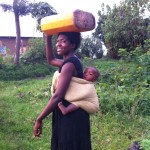 Tragedy is impossible to measure. It’s the same for beauty. I sit in my backyard and hear above the graceful soar of the olive ibis. This bird, with a curved pointed beak and rasping call, has a dark beauty. When it speaks it can be heard for miles, Cahaw, Cahaw, Cahaw. The memory of Rwanda’s horror is in this call, just as it is soaked into the brick-like soil– it is etched on the back of my throat. Machetes worse than swords. A baby’s blood running down the mother’s arms. Legs that run, that hide, that run, that collapse in the hush of tall grass. It was 23 years ago. It was just yesterday. It was genocide.
The genocide memorials in Rwanda have an momument with the place for an eternal flame. Ntidigasubire- Never again. Is that a hope: is it a promise? 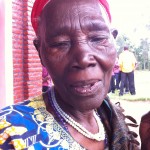 The memorials are many; in Bisesiro, Gisenyi, Nyarubuye,… They host mass graves—here 35,000, there 12,000, over there 300,000. The sites are, for the most part, desolate. The guides are survivors with subdued voices. Standing at the edge is a sentinel with a big cap, rubbing his boot on the soil, blotting out something unspoken. The heinous acts at these memorials hang in the acrid air. The birds fly overhead–who will remember? 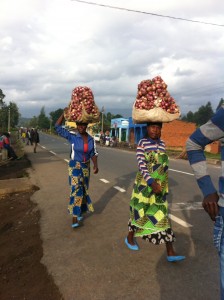 I walk among the throngs of people in the Kigale open market: it’s a cornucopia of bright vegetables laid out in neat rows on kangas (African fabric). Tall burlap bags of rice, sorghum, corn, wheat and potatoes are stacked in front of stalls. 8 million people selling, planting, running, studying, praying in this country the size of New Jersey. The red dust settles like grated citrus rind on socks, shirts, and hair. I walk along a ruffled road, picking my way gingerly between vendors. I mentally note those who are under 25 and therefore don’t remember the genocide, and those older than 23, born after the horror (although more violence happened in the late 1990s).

Most of the women vendors are mothers, more present to the birth of babies, than the slaughter of innocents. Rwandans families are typically 4-7 children. After so much death in the 1990s, families feel free raise many children. When Jonathan and I say we have two kids, the Rwandans look askance at us, “Only two?” Yes, two is good–all that I want. We met an English couple who decided it was easier to fabricate fantasy children than to explain to Rwandans why they chose not to have children. 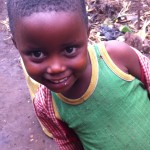 One child, not more than 30 months, followed me around the chaotic market, chasing and laughing at me. He ran and dodged among the buyers. But I never saw his mother anywhere. He showed up behind the woman with a basket of avocados on her head. He giggled capriciously, hiding from me and trying to be found. After 30 minutes we walked back out the entrance of the market. There the mom was selling tomatoes and scooped up her chuckling son, not seeming to miss him.

There is laughter, flowering trees, fragrance of exotic fruits, and hidden pain. When you hold shameful memories of mass killings, how do you make sense of it? How do you explain it to your children? The US commited genocide against Native Americans, yet we in America, appear shameless. This American genocide happened before instant media, and the world was unaware. But the world community recalls the genocide of Rwanda, and knows of its complicity. 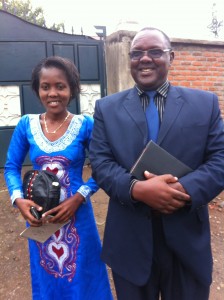 The US did nothing to stop the Rwanda genocide. MLK said, “In the end people will remember not the words of your enemies, but the silence of your friends.” Now, in 2016, many first-world countries help Rwanda. Many NGOs and churches, including Quakers, put money here. Quakers have sent books for 7 Peace Libraries; funded Alternatives to Violence for 15 years, planted small gardens for the pigmy people here; joined in powerful Trauma Healing trainings; taught classes; set up medication trainings; recently UK Friends piloted a Turning the Tide program for community transformation of injustices. News flash: 3 boxes of books just arrived from Cambridge Friends School! Of course, this work is done from love, not just guilt. Genocide- we must always remember. The ibis comes down to roost on the cypress tree. Cahaaw. Cahaw. And what do we tell our children? 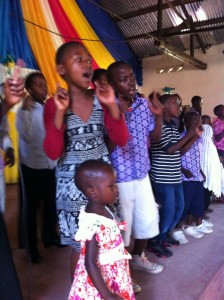