Why am I not elated? A pallor descends on my face. Why does my heart come to a standstill? The President pulled out the last fighting troops in Iraq, but I’m not jumping for joy. I wish I could celebrate. I admit that removing combat troops is a step in the right direction.

“Hooah!” the soldiers roared. Over 7 years of fighting is good news? As a soldier I’d definitely be delighted to pull out. The living conditions in Baghdad are torrid, so I hear. There’s lower education than under Saddam Hussein 10 years ago. Since 2003 and the fall of Saddam, the war on terror and in country conflict has destabilized the Iraq education system. 2751 schools were damaged severely. Other schools experienced looting. Teachers attendance dropped drastically. It is unsafe for many female scholars to attend school.

Water, jobs, and doctors are lacking. I heard that houses, bakeries and sewer plants limp on 3-8 hours of electricity in Baghdad. Imagine that! There are many injured and an estimated 100,000 innocent Iraqis killed by troops. Need I state that the infrastructure in Iraq is much worse than 10 years ago? War destroys progress. 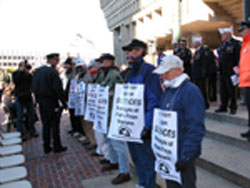 Vets for Peace, Boston 2007 by Schiel

Some regimes are toppled such as the British reign in India (1930s) and the apartheid government in South Africa (1989) with a humanitarian outcome. But in Iraq since Operation Iraqi Freedom we now know there were no weapons of mass destruction, and no elimination of terrorists. Members of Al Qaeda in Iraq have increasingly resorted to kidnapping and extortion to stay afloat, General Higgins said. What freedoms did we offer the Iraqi? Do they have a democracy? No, they can’t even arrive at results from the March elections. As of September 5th, there’s more suicide bombings and killings in Baghdad against American troops.

Does the quality of life allow new enterprises? Has the crippling war delivered any more religious tolerance? With grinding poverty can Iraqis enjoy cultural pride of film, art and architecture? Would you be happy if a country, letâ€™s say Sweden invaded the US saying that the religious right and the practices of oil companies was a form of terrorism? Supposing the Europeans came to occupy the USA until BP criminals could be put to trial?

I plead to Obama, Palin, or Elijah that we arrest our war making. We still have 50,000 troops in Iraq. And 57,000 in Germany; 60,000 in Japan and Korea; and now about 100,000 in Afghanistan. Altogether we have 360,000 troops deployed in other countries. We are armed to the teeth; we are a nation always at war without studying methods of peace. Instead of putting our best foot forward in other lands, we put our combat boots first. I admit to a sharp tone here, but as a Quaker, I aim to eliminate the need for war. Quaker principles aside, does anyone claim Operation Iraqi Freedom a worthy war? Iraq didnâ€™t prosper even with our tax dollars to the tune of $751 billion gushing over there. And so in short order, we will say of Obama’s Afghanistan war.
Friends, let’s seize this opportunity. As the combat troops disappear out of Iraq, let all citizens ask for a time of amnesty. Each of us ask the US to do one thing to lead to peace among countries. What are the many avenues to consider? I’m asking for a 30% reduction in US military spending for our next fiscal year.

I’m aiming to salute my neighbors Asalam`alakum during this holy month. And I’m knitting wool hats and blankets during my planning meetings. I could send these to some Iraqi injured children. Or should I send it to one of the soldiers stationed in Iraq, 5,000 kilometers away from this home that is still hemorrhaging?