Hello sisters and brothers in the Journey, 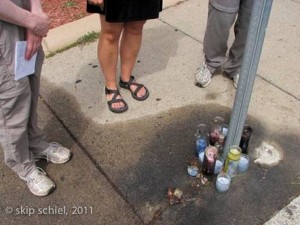 I’m writing as I dream. I run within a dream. My work is misty. To stop hate, my eyes turned inward. I’m as somnolent as a street walker. Hurricane Irene urges us to think about what needs doing. I reach out every day and still I sleep-walk. My feet are in this physical world, yet I dream in another reality. Can I work adeptly here while listening to this zone?

After Quaker worship in May, Kathleen and I felt a yearning to lament all the senseless killing. We both have teenage sons. My son, recently out of high school, has seen lots of drugs and weapons. Kathleen’s son is now in middle school and she is painfully aware of bullying among pre-teens. We are social workers and community organizers but we come forward as humans searching for God’s voice in the midst of community pain.

What does it mean for you, to be living in the last empire days of the US? What does it mean to my children, like Lucy and Evan? What about mothers like Kathleen raising a nonviolent 13 year old boy? Because the truth to living is in the spiritual world. The truth is not in the ways of the Roman or the Chinese dynasty or the US Empire. As a Quaker, I’m looking for winds of change and signs of the Spirit. We need to build a new system based on the ecosystem, not human desire for power.

I told Kathleen how I am haunted by a recent funeral in Mattapan. There was a triple murder on Sept 28, 2010. I want to pray on the spot where the murders happen. Kathleen said these street corners, marked by precious blood, is holy ground. So we planned a walk to the murder sites and called it Walking On Holy Ground. Kathleen said it’s not just praying for the victim, it’s praying for the neighbors. I wondered if I could pray as much for the gang members who allow shootings as for the grandmothers who discourage it. Kathleen and I agreed that to ‘love your enemies’, we need to pray for the perpetrators. 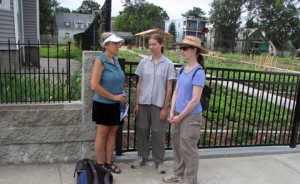 Much attention has focused on Boston for performing the miracle of stopping street killings. Over decades, we Bostonians have been a  bloody city — and we’ve been able to turn that completely around. The drop in murders is touted as the “Boston Miracle“. Murders in the city dropped from 152 in 1990 to 31 in 1999. The number of youth murders (those under 24 years old) plummeted.  Between 1997-1998, for more than 2 years, there were no teenage homicides. But the city’s death rate is up again this decade. Wake up Boston. Attention all Catholics. Hey, if Boston accomplishes 3 miracles, the Pope can sanctify us.

The 72 murders in Boston in 2010 are not necessary. I don’t care what is the cause of the murders: we can blame easy guns, drugs for sale, the slum lords, or lack of jobs. What matters is paying attention. Dream the dream and acknowledge the pain. Some Quakers snapped out of denial, and went to honor the living while remembering the dead.

Four of us walked on Holy Ground today between Fields Corner and Blue Hill Ave. We visited 6 sites where bodies fell in 2010. For 3 hours we walked, prayed and asked questions. Afterwards we visited staff at the LDB Institute. At our first site, Stop 1, we were a stone’s throw from the train station, a busy charcoaled street.  Many people passed us 4 standing in a line, praying. Mostly we pray in silence, sometimes thankful for the life lived, sometimes intoning the name. After 10 minutes we walk to the next site where a life was snuffed out.

Stop 2 Two Cape Verdeans brothers came out of the house on Tonawanda St. They didn’t know about anyone dying at that site but they respectfully let us pray there on the sidewalk. Then they went to trim the yard.

Stop 4 had a surprise for us. Adjacent to where Charles Contave was killed last year, there was a spanking new community garden, with wide cement walks, raised beds, a pavilion and a port-a potty. (Yes, I mention the restroom,  which is so practical for the public and yet rare in Boston). We spent time there with long rows of vegetables.

Stop 5 and 6 on Harvard St. were next to the Bethel Pentecostal church https://betheltab.org. Rev Gwendolyn Weeks was outside ready for a photo shoot. She took almost 30 minutes to show us their new chapel, prayer room, and a academic summer program with 30 kids enrolled. Gwendolyn spoke of moving here 5 years ago and how many drug deals and lots of illegal actions in the building, which once was a Catholic church. We prayed with her and the church’s work.

Stop 6 our last street corner we prayed for Toneika who was killed last year at age 22. There are 10 candles around a street pole with a purple ribbon around it.

Stop 7 We returned to LD Brown Institute and spoke with Tina, Rachel and Milton. We want to be connected to those who work in the community.

I thank you for all your prayers. It was a beautiful walk.

Our next walk on Holy Ground was August 30.Why is this walk more fruitful than sitting at home and praying for the fallen? How does this walk bring peace? See the next blog for this. We can abolish aggressive weapons. We know how to stop family violence. See the next blog for more steps. Ask hard questions. Lean your heart towards Eden, and cross your feet over pavement. Even if the sidewalk is bloody. 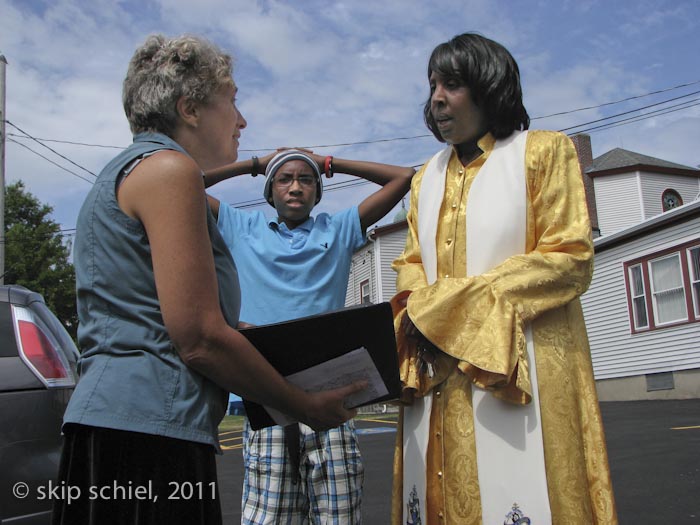