The Keys to the City

I was walking with Juan down into the valley of La Paz. Not really walking, my feet sideways picked nimbly between stones and holes. It was a valley, with the descent so steep in this city 10,000 feet above the sea that I was breathless. Nevertheless I was happy to hike instead of drive cramped in a mini-van with 12 passengers. This Friday the city was awake. La Paz with a million people, was clear of fumes and noisy engines. Bus unions all over Bolivia had called a transportation strike on Feb. 25th. Una huelga firme. A total strike. Schools were closed. The streets were a river of people getting to work. Juan and I edged down the curving roads to the Quaker Education (BQE) office. I wasn’t about to stay grounded at home, because I hoped to see Pablo at the office. Juan and I both enjoy our work with 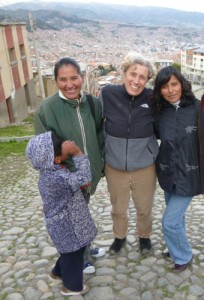 Friends. The air buzzed with novelty. The cost of living was climbing and the bus fare of 1 boliviano (15 cents) too low. The unions were asking to raise the fare from 15 to 25 cents. The unions made a strong chess move today. How would Bolivians resolve this major problem? People seemed riled up and resolute. I was excited. As a Quaker I was impressed to see people using economic pressure, not military might, to voice their dissent. Bolivians felt empowered and were acting on it.

Juan lives in Villa Harmonia and it takes 25 minutes by bus, and 45minutes by foot. Juan is BQE’s business manager with dark eyes behind boxy glasses. Juan exudes the Bolivian delight in conversation. I soaked in every word while pouring out my best Spanish. We chatted about his house (many houses near his street are built on dangerous precipices; the torrential rains (the summer even had several hailstorms); the new Education Law (adding the teaching of native tongues and diversity); the closing of 2 Quaker schools (some of BQE scholarships students spoke with determination to reopen Emma Camaday school). There was so much to understand how a nonindustrial country raises the bar in its schools.

We reached a circular plaza near Plaza Comacho. Juan suddenly pointed out a crowd of men, mostly in dark pants, standing in the street. Two vans flanked them on one side. “There’s one of the large unions.” Juan explained. I watched a large man in a jean jacket pull off his belt. The shouts were pitched higher, “Si, si se puede. Adelante.” Why are they yelling go ahead? What was the crowd was urging? Then the crack of a belt smacking the back of pant legs. “The busdrivers who got caught transporting today are being punished for busting the strike.” I was confused and remembered how Quakers always travel in pairs. Well, I needed Juan now. I understood that the beating was shaming the busdriver and was more symbolic than painful. Still I was unnerved by the primitive public flogging. Juan’s presence was assuring, “That’s not the way the church changes behavior.” I saw that we shared a lot. As Quakers we don’t hit miscreants. In working at BQE we share the value of reaching agreement, or persuading someone to change. Quakers keep their belts on.

Juan expertly guided me through the bridges and plazas of La Paz. We reached Plaza Eguino, just 2 blocks from our BQE office. Juan smiled as I sucked in the misty air.
“I know where I am. There’s the statue of our patron. She looks like Athena.” I said in staccato Spanish. Eguino loomed 30 feet over the vendors, tourists, and children.
Juan looked me in the eye. “She’s not Athena. Vicenta deEguino was a real heroine of LaPaz, who fought for Bolivia’s liberation from Spain. Her weapon was her elocution. She did fight, and even used her living room to store ammunition back in the 1800s. When captains sank in retreat, this lady rode on her horse and spoke in the native tongue, Aymara to the people. Eguino animated peasants to lay down their despair and keep fighting for their rights. She sacrificed her class privilege, enduring many hardships with the rank and file. When Bolivar, flush with victory, entered laPaz she greeted him at the gates. No words were necessary as she lifted higher than a sword the keys to the city. She handed them over to the Liberator with a flourish and the jingle of keys was heard over the crowd.” 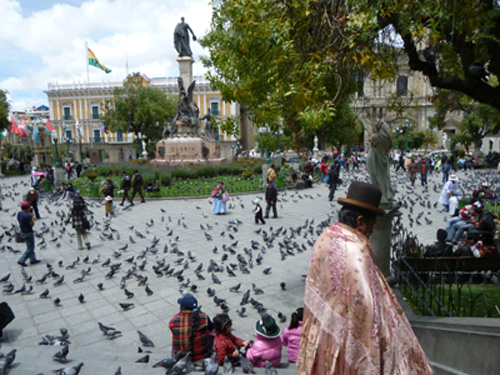 Juan gave a nod to the statue of Equino as he steered me around a woman selling avocados on the road. There was no fear in the streets as people bargained; some children played with dolls; teens sold DVDs (only $2 and pirated).

I met with Pablo in one room while Juan opened his laptop in the adjacent room. Pablo studies at the university agronomy and business. He wants to combine selling healthy foods while helping the Quaker youth. He doesn’t want his career to intrude on mentoring his younger brothers from the rural area of Sorata. Juan leaned into our room. He grinned and added, “Pablo, just don’t let your brothers become bus drivers.”
“Yea. They might get hurt.”

I told Pablo about witnessing the whipping of busdrivers. Pablo’s response was insightful. “How do we encourage change? Managers need to understand why a busdriver would ignore the strike.” Pablo, like many Quakers saw the whole picture. Universities also have angry students who can’t pay tuition.

Juan explains that one student last year only had 80 cents spending money a day. He could eat a meal at the cafe (no McDonalds in Bolivia) with enough money to return home, or he could pay for a notebook. He put his studies first. To save money he ended up walking hours home on an empty stomach. This year he was accepted for a BQE scholarship and is studying engineering. BQE students don’t even know the word lazy. Now he doesn’t have to choose. He can eat and buy school supplies. I could see why Juan was proud of working for the Quaker scholarship program. Juan works hard so 20 year old Quakers can emerge from poverty. This poverty has haunted the Aymaras since the Spanish conquest. Pablo has a dream including meaningful work and helping his generation.

As we closed that day, I sent bouquets of thanks to our Creator. I sighed imagining the steep hike before getting any supper. Suddenly in the air I seemed to hear the stamping foot of a horse. was it the altitude or did my heart flutter? I saw the lady, our patron Equino as a beacon here at BQE. Juan heaved shoulderpack under his arm. Equino like Juan and Pablo threw all their weight into the struggle. We stepped onto Illampu Street and the cacophony of evening sounds greeted us. And I distinctively heard the jingle of city keys.