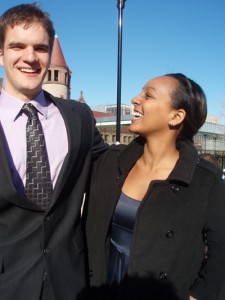 Whatever was Djhokhar Tsarnaev thinking– accused of setting off homemade bombs on April 15? It’s baffling. Here is a teenager, deeply wounded, isolated from all he knew, and now in police lock-down. I did meet him a few times when he was 16 at the Cambridge high school. Djhokhar grew up in Massachusetts where “all the kids are above average.” (as said by Garrison Keillor). His fate is wrapped up with the fate of hundreds of injured people. I do not excuse what he did.

When my curious sons entered high school, I was shocked at the danger exposed to them: the hazing, the used needles, the assaults. In 2005 I woke up from a daydream that the US is a safe and law-abiding society. Like ice cubes down a sweaty back I realized our cities can be a war zone for teenagers. My son was harassed by gangs after school: he was intimidated and paralyzed. He escaped physically in one piece, but his inner landscape was scarred.

Now after Aurora, CO and Newtown, CT an epiphany strikes me. A major problem of our culture is that Americans murder one another as much as we kill “enemies” overseas. An armed police officer is employed at the high school, where students have been removed for 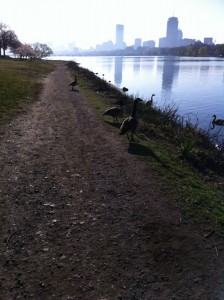 carrying switchblades. After Kennedy’s assassination Malcolm X famously said, “The chickens have come back to roost.”

You know what I’m saying? These massacres, by and for Americans, show how our young men are addicted to violence. It’s not criminals pulling the trigger– it’s not the drug dealers, nor the crazies, nor the sociopaths. It’s our children, growing up under the opium of the gun. By 10 years old, Americans learn that problems will get solved if you carry a gun. Our boys are executing the values promoted by the NRA and allowed by the media (TV, games, CDs). It’s Djohkar this time, next time it could be your nephew. Kids have access to guns, and access to making bombs. The hard truth of the Boston bombings is this: we are all complicit.

The effect of mass violence is a people in trauma. Our haunting fear is that our children are at risk in schools, on buses, huge concerts, and now at large sports events. Where is the fierce mother bear icon to protect the defenseless? Imagine a grizzly hunting for berries, and finds her cubs in danger? See her stand rising up on hind legs, bobbing her head– doing anything to keep her cubs safe.

Christians wait piously inside church, praying for their salvation. At night Godly people lock their cars with a McFlurry shake in hand, hoping not to hear gunfire outside. Will salvation come in church, in the courts, or in the jailhouse? Where can we reverse the gang-busting, trigger-happy attitudes of our young people?

My sons are excelling in college, but did not escape unscathed the initiation rites of teenage cruelty. My sons grew up happily engaging with people like George Zimmerman and Djhokhar Tsarnaev. My sons are constantly living out the question: how can you be a respectful, strong man without being violent or revengeful.

How  can we stop accepting violence?

We will talk for months about the Marathon bombings in Cambridge where the two Tsarnaev brothers grew up. Djzokhar, the 19 year old, was a year behind my son in high school. They played volleyball together, my son was the team captain. My older son worked for at a summer job for 3 years with Krystal Campbell whose body was blown up by the bombing. One son knows the accused, the other one knows 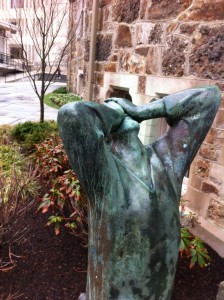 Our family is struggling, the same as most of us are trying to make sense of it all. Let’s not just continue work as usual. We do not have to accept the use of violence when our cubs get as big as we are. Mother bears can do more than growl.

The Jewish scriptures provide understanding for Boston’s tragedy and the culture of violence:

“A voice is heard in Ramah,

Rachel weeping for her children…, because they are no more.”

This is what the LORD says:

“Restrain your voice from weeping and your eyes from tears, for your work will be rewarded…” (Jer. 31)     Let’s get to work. 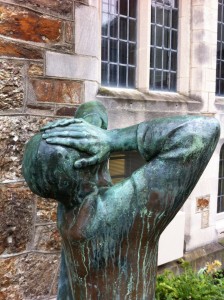