For eleven days and nights in June 2011 the Student Immigration Movement vigiling on the steps to the MA state house. They did not leave except to go to work and go to the bathroom. They had 2 boxes and 2 canteens. One box held apples and clementines and sandwiches. The canteens had cold Gatorade and water. There was a box of papers with petitions and artwork and poster papers. A banner reads, MA is not AZ, is it?. Stop laws that arrest immigrants. 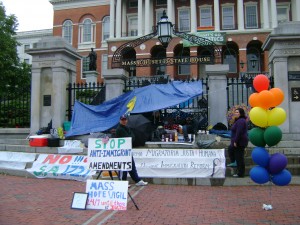 Their motto is education not deportation. Deportation breaks up parents and children. They want education with tuition that’s in-state. They ask that the US stop criminalizing neighbors without papers. State offices use a new regulation system called E-Verify, where employers go online to find if co workers are legal.

But does this affect me? YES.

In these days of Wikileaks and the confinement of Robert Manning, To express your opinion is dangerous. To state unpopular opinions makes you an activist. We are all in this boat together, so out of self-respect I support SIM students. 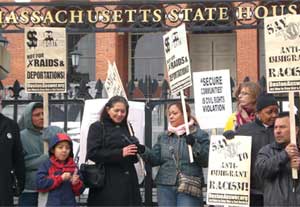 The state legislators are passing a 2012 budget for Gov Patrick to sign. Last year these legislators tried to attach similar anti-immigrant amendments to the budget and the students held a vigil for 3 weeks. These amendments include housing laws, penalties for being put in detention and encouraging police to deport people who are picked up moves Massachusetts much closer to Arizona SB 1070. Arizona’s law allows white tyranny as police pick up anyone who looks suspicious. Â I went with several students to representative’s offices as they spoke of how their skin color affects their chances of being stopped by police more than their light skin friends. 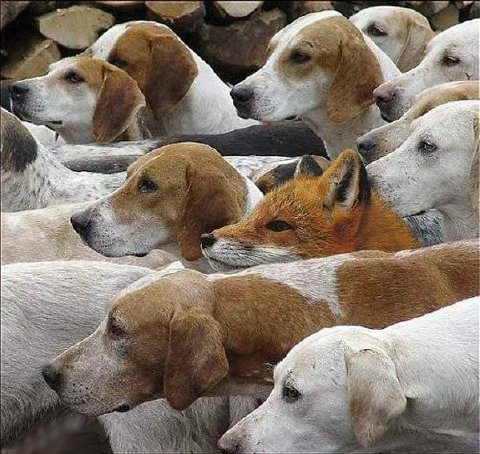 We went to 5 different offices and explained why we are against these amendments. Pablo explained he just graduated from High School and wanted to go to U Mass. He was born in Mexico but arrived with his mother to the US when he was 5 years old. He loves living in Boston even though it wasn’t his choice. He’s attended all public schools since then and learned about equality and justice for all in US history classes in 5th grade, the US Declaration of Independence and fighting for your rights in 8th grade civics, and later in 11th grade US history and its abolition of Afro-Americans and women suffragists.

So after getting decent grades and wanting to make something of himself he doesn’t get to have legal papers. His life is so restricted because he can’t afford the out-of -state tuition.. It costs $10,000 for U Mass Boston tuition for Mass residents. It costs $23,000 for out-of-state residents. With scholarships the lower tuition is reasonable. Of the 13 states that allow those born outside the country to attend at the instate rates, they find that it adds to the state’s coffers. States like CA and TX thrive with in-state rate. And it’s an investment in the future to increase the amount of well-educated employees in this state. These students aren’t asking for welfare, just the lower rate for tuition. Then MA offers them education that we will reap the results of. We’ll have doctors, philosophers, teachers and chemists who have the richness of other languages and can develop their skills in this state.

Why did I join the immigrants on the steps of the White House? I have my legal papers and my family settled as farmers before the US fight in 1775 for independence. My mother was not born in the US and by human idiosyncrasy is a US citizen. I traveled to study Spanish and went far south. I lived close to Mexico for 4 years. When US kids study in other countries, like France or India, do we want our students to be picked up and reported to the embassy because our kids look suspicious? No. The Torah and Islam ask us to Welcome the stranger. Someone counted 120 versions in the Bible of this request “love the stranger for you were strangers in the land of Egypt.” A minister, Debra Haffner shared this on-line, “A political cartoon I saw had a Native American standing in Arizona. In the first frame, the bubble over his head read, “Know who we call illegal immigrants in Arizona?” In the second frame, the answer: “White People.” They seem to have forgotten that America’s motto is E pluribus Unum (“out of many, one”)

As a Quaker, I joined a closing prayer circle on July 6th. There were Jews, Episcopalians, , Unitarians, and Catholics. Many thoughts were shared:

oÂ Â Â  God is an immigrant. Jesus, as a refugee, went to Egypt with his parents.

oÂ Â Â  In Mass we can reach across the divide.Â  With a closed fist, we cannot shake hands.

oÂ Â Â  The courage of these young people to stand up for their freedom is palpable.

oÂ Â Â  Those who employ undocumented workers can exploit, even rape, them without legal penalty.

oÂ Â Â  Immigration is the next labor movement.

oÂ Â Â  To stop a person because they have no papers is perversely dis-
empowering. 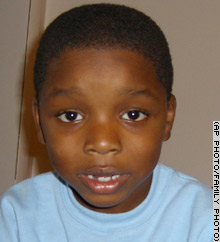 oÂ Â Â  We have lots of immigrants because the Pentagon and Wall St. are allies.

oÂ Â Â  They (SIM) are carrying us into the next civil rights movement.