The world is sweet and dripping with Spring. Holy abundance has sprung underfoot. My heart quickens at the sweet flute of finches, the hum of the first bees at the cherry blossoms.  Wasps, lizards, chipmunks and coyotes learn to adapt to this explosion of Spring. And yet. I live with dissonance.

The discomfort is that humans show evidence that they cannot live harmoniously with other creatures. Humans murder each other intentionally more than any species. Kurds, Syrians, Americans, Australians, Russians, Salvadorans, Haitians, are starving or leaving homes or stealing from neighbors, or selling drugs or putting bullets in peoples’ brains. The United States, because it’s the largest exporter of military equipment and Intel, is the heftiest bully in Earth’s neighborhood. US weapons are killing young lives. This country crowned with verdant trees deports refugees under death threats back home. Mockingbirds sing while we bomb countries like Syria—Afghanistan—Yemen.

Humans have twisted creation out of whack. The beauty of Spring is ephemeral. Evolution/creation has developed dappled, colorful life that at the 42° north longitude mean gardens of plenty. I am a sliver in the Creation’s kaleidoscope of changing nuggets. And yet…ah…ache. The dissonance jars me. We starve, steal from and murder. Humans are rapacious, myopic and ethnocentric.

Do you want to know how I bridge wonky inner despair with the wondrous beauty of the Earth? I dig for hope. I will tell you about humans who overcame adversity. They are bright spots in life’s kaleidoscope. These women like sentinels in Life’s Quest for meaning have pointed the way. Their courtship with dreams invited transformation. 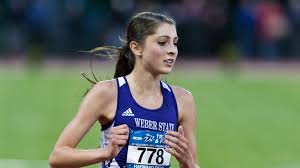 Meet Sarah Sellers, a 26 year old nurse from Arizona, with long hair and a broad forehead who dashed onto ESPN last month. On April 16, Sellars came in second place in the Boston Marathon, during the worst weather conditions on record. Not only was it a cold slashing rain, the wind pushed and gushed against the runners at 20 mph. Sellers had never won a 26.2 mile race competitively, she had only run her first marathon in 2017. She completed the grueling race in 2¾ hours. “It was just complete disbelief. It was like a hurricane out there,” Sellers said on marathon Monday.

Was it mostly swiftness needed to win the race? Sellers had grit, unconventional training, support and stamina. Because her brother asked her to, Sarah tried out for her first marathon race last September and qualified. She kept her full time job as a anesthesiologist and trained for barely 6 months, working out at 4am and after work at 7pm. Her long dark hair bobbing, Sellers responds to the to a question of how she will spend the $75,000 prize money, “Yeah, I haven’t thought about that.”

Before April 16 Sellers was stellar. For 25 years her fleet feet have graced the Earth. A week later she went back to her 10-hour hospital shift. She is still a star, using her gifts, humbly. What a gift.

I spend time daily with people of courage. I love listening to Ursula LeGuin, whose novels bent the scope of my vision to lands where humans are neither dominated or dominating. She painted the story of androgynous Shevek in 1974 who was born without fixed gender on the planet Anarres. Thank you.

I reap courage from Cecilia Payne, who opened locked doors for female astronomers. She taught graduate courses in the 1930s when Harvard refused to pay her. Payne gave evidence of the sun’s composition of helium and hydrogen, refuting popular theories. She studied the Milky Way and the cascading spectrum of light. Payne illuminates my place in the universe. Thank you.

And I’ll shoot you one more bright star. In these smoggy days, my life is expanded by Carrie Fisher. Yes, I honor Fisher, not just because of her portrayal of Princess Leia, but her honesty in talking about her bipolar disorder. Fisher is candid, instead of secretive. She explains to children how the mania-depression works in her, “It’s a kind of virus of the brain. It makes you go very fast or very sad. So, judgement isn’t one of my best things. But I have a good voice and I can write well. I’m like everybody else, only louder and faster, and I sleep more.” Thanks to Fisher for clearing the air I breathe.

Sellers worked long hours, took risks and ran the race on her own terms. Payne and Fisher spoke bravely about taboo topics. Sigh. Breathe. Sing when the dissonance emerges. Brightness penetrates a dark sky. The fight for liberation is sharper than a Spring frost: the taste of liberation sweeter than honey. The bees are gathering pollen before your eyes. Don’t blink. It’s Spring.

LeGuin writes, “Love doesn’t just sit there, like a stone, it has to be made, like bread; remade all the time, made new.”