by Minga Claggett-Borne | May 10, 2012 | Quakers in the Field, Stopping Violence

When I first read about the 6th World conference of Friends in Nakuru Kenya in April 2012, I was mostly excited. My heart palpitated. Then as I heard the theme a cloud descended: Being Salt and Light. Being Salt? What does that mean? Salt wrinkles the skin and all those potato chips causing stomach rolls. As a dyed in the wool Quaker I understand God, the metaphor of Light works for me.

I love Quaker expressions such as Inner Light, Children of the Light, Seed, magnifying, illuminating. But salt ? Sailors are ‘old salts’, and Massachusetts is known for Quaker shipmasters in the past. Paul Cuffe was a venerable Quaker Salt. Salt comes in the form of potato chips; nacho cheese; cholesterol. I wasn’t thrilled about it, so I returned to prayer.

I waited and studied before going to Kenya. At the foundation of our faith, salt was a symbol of the eternal nature of God’s covenant. “The Lord gave the kingdom of Israel to David (and his sons) forever, by a covenant of salt.” 2Chronicles 13:). Salt preserves a relationship just as it preserves food. With salt food tastes better, and salted meat won’t putrefy. For 1,000s of years, salt was wealth. salt was used as money: Soldiers and servants were paid in salt. I know salt, like light, has multiple uses and has been invaluable to humans. The tough part was Being Salt: if you lose your saltiness, what use are you? Matt. 5:13. After months I felt clear, expecting more Light out of the conference than Salt.

As it turned out jettisoning myself, and 70 pounds of luggage to Kenya, was hard work.

I dragged the weight around sweating through airports and buses. Sore muscles and sweat salted my arrival.  Nairobi is a western city with skyscrapers, Barclay’s bank, Cadbury chocolate, therefore despite my Kenyan hosts, I had to keep alert.  I was thirsty to know what Creator had in store for me. I hungered. Here I am Lord, use me. I didn’t just come to eat ugale (type of millet polenta) and goat meat. Some inner saltiness spurred me to Kenya, now what?

Before the world conference, I traveled around Kaimosi, Chwele and Lugari yearly meetings with beautiful days of brilliant sun and sudden downpours. I had a mission to encourage peacebuilding skills. I’ve been teaching peace through Friends Meetings for 20 years; I’ve worked stopping domestic violence. Kenyans have an amazing amount of groups working for peace. I witnessed their power despite family members dying from AIDS and parents walking miles for clean water.

In 1992, in 1997, and recently in 2007 there was much violence as factions vied for the presidential election. In 2008 about 1,500 people were killed, many raped, houses burned and 600,000 internally displaced persons.  How can Friends respond faithfully with another presidential election this year? Many Kenyans Quakers lost their farms (livelihoods) and some lost family members. 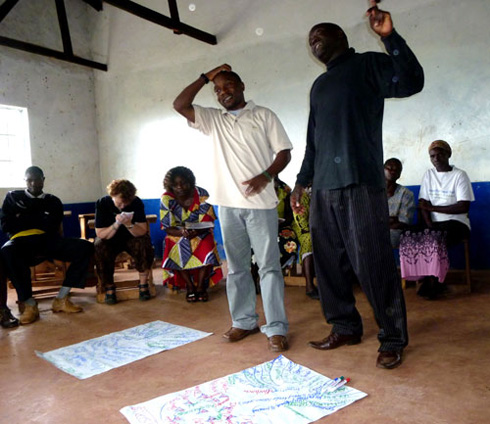 In 2009 a program Healing and Reconciliation in our Communities (HROC) was introduced in Kenya by Friends. I participated in a 3 day HROC workshop, altogether there were 20 of us, some Westerners, many Kenyans. Our guest facilitator was Theo Bizimana from Rwanda. The workshop is based on trauma healing so that the first day is building safety and trust. The second day we spoke the painful stories, and mourned.  In 2007 one woman watched her family including her husband killed by a group called the Land Defense Force near Mt. Elgon. They were about to kill her, but a phone call interrupted the killing and the murderers changed their course. Other stories ensued of hiding children in sheets, burning houses and stealing cows and land. I heard someone say, “I called to God day and night and only saw machetes in my dreams.”  It was heart-breaking.

The third day we looked at reconnecting and rebuilding our communities. We were asked to name a person that we trusted and why. We drew a tree of trust. What elements do we need to nourish the roots? People spoke of what steps they could take in the community of trust. One neighbor paid for a child’s school uniform. Someone had extra seeds, and shared them. Children from different tribes played football together.

As a witness to the healing, I stayed curious and encouraged as much as I could. It seemed that as the shameful stories were exposed, the light burned brighter. HROC is a quiet way for those who suffered to take their light out from under the bushel basket.

The world gathering was a wonderful blend of young and old; programmed and unprogrammed Friends. I learned a lot by the sharing from my home group where we had Brits, Kenyans, Americans, one Ugandan, and one Zimbabwean. We shared respectfully our hopes, our loneliness, concerns of gay marriage and Biblical prophecy. We were kind to each other, and sometimes peppery. I heard more stories of violence from each country: broken relationships, drinking excessively while children go without. We looked at the violence of human greed. Everyday Kenyans carry firewood from the forest, while we collectively confessed our dependence on fossil fuels. I vowed to honor Wangari Maathi’s vision of re-forestation.

I came home exhausted and exhilarated. The best part of any world conference is returning back to your own Meeting, where you are loved and known. Now I need to learn how to transplant Healing and Reconciliation in my own community. And I will plant that pear tree I’ve been dreaming of in my yard. The world gathering starts when you get off the airplane, not when you embark.

Thomas Owen Aotearoa Yearly Meeting spoke in a keynote at the world gather of Quakers attempts to “overcome our divisions and attain unity. The work of the United Nations, Friends’ international peace work, the inter‐governmental panel on Climate Change, to name just  a few, are recent international examples of this (peace-building). The African Great Lakes Initiative’s AVP, HROC, and mediation work happening right now here in Kenya, Rwanda and Burundi is another – which, to my mind, is some of the most important work Friends are doing right now. It is a privilege to be here to witness it.