Ramallah: Friends presence for over 140 Years 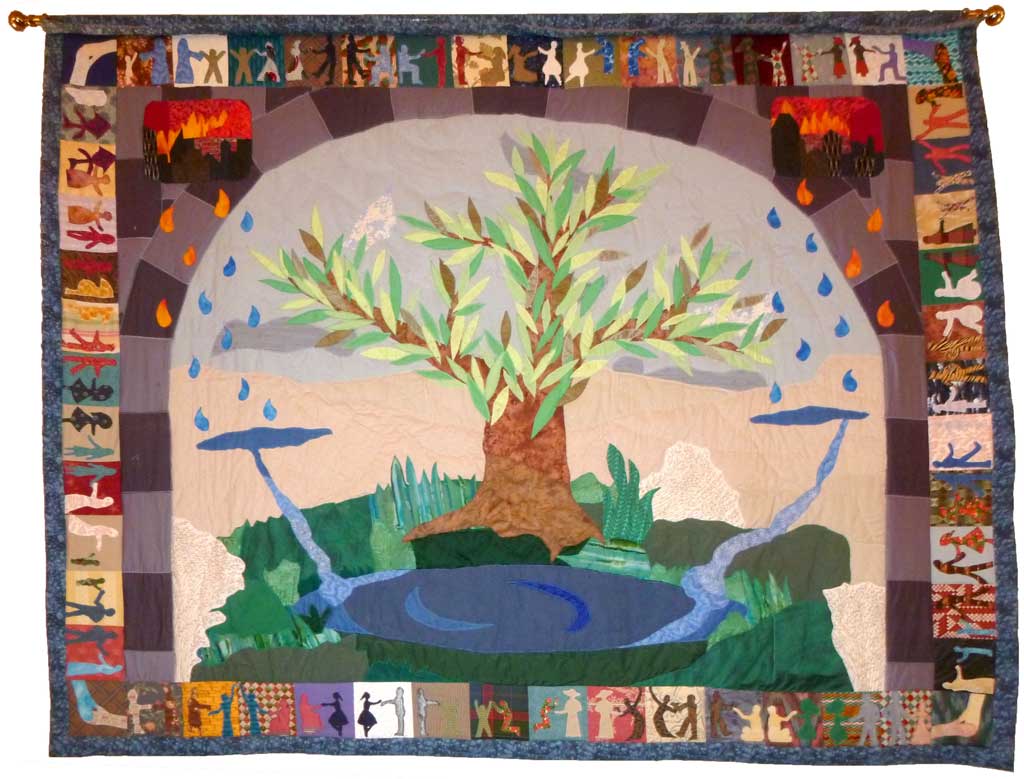 On Sunday Jonathan and I had a long rest and got up to worship at the Ramallah Friends meetinghouse. The Ramallah Meeting is small, with thick stone walls and arched windows.I soaked my dusty soul in the coolness and quiet. It was built in 1940 exactly between two townships, El Bireh and Ramallah. Now it is planted in the middle of the commercial district. A beautiful quilt of an olive tree by a pool of cool water hangs in front over white stone. It was made by an ecumenical group from Harvard university (Diane Eck’s group). It cost $150,000 to rebuild the Meetinghouse in 2005 (after the 2002 intifada). For all the Quakers in the USA that helped to resurrect this oasis, I give thanks.

Jean Zaru, a well-known Friend, welcomed us all. Of the 12 people attending she was the only Palestinian, the rest were internationals like myself living in interesting times. Jean got called away for a family event: the birth of her first great-grandchild. Kathy Bergen invited any and all, after Meeting, for turkey soup and discussion. Kathy works at the Friends International Center in Ramallah (FICR) and coordinates many programs to promote peace. A weekly group meets called ‘Right of Entry’ (helping to advocate for children and adults detained at check points); book readings are popular; welcoming visiting Friends and even concerts.

On Monday and Tuesday we visited the Ramallah Friends Schools. The older campus is the lower school, 27 classes, K-6 grades. It’s a vibrant and beautiful campus. The new Kindergarten building has been under construction for many years, and now for the first year houses 8 classrooms of bubbling children. Of the nine new teachers, seven are from the USA, and most speak Arabic. They have special needs children incorporated into regular classroom. The level of speaking English is very high. Jonathan and I taught a 4th grade English class, and they asked clear and complicated questions. “Do you go to Russia?” “Will you forget Palestine?”

The Upper School was built by Friends around the world in 1901. Technically it’s in the municipality of El Bireh and just a few blocks from the Palestinian governmental offices of the president, Mahmoud Abbas (where Yasser Arafat was under siege in 2002). The Upper School has huge soccer, tennis, and even American football fields. They are offering new sports like boxing. Students have laptops, the library is filled with Time magazine, National Geographic and many books in Arabic.

Compared to Quakers in Bolivia and in Cuba, this school is plush. For every student accepted, another is turned away. It’s the most prestigious and most expensive school in Palestine. Other Palestinian private schools get huge subsidies from their churches. The Ramallah schools love having Quaker visitors.

Poverty grips Bolivian, Cuban, and Palestinian children. Students have more access to resources to study in Palestine. So what is the Quaker witness here? Imagine living 20 kilometers from Jerusalem, maybe where your grandmother and uncles live, but only going there once a year. You don’t have permission to enter, or the humiliation is so great at checkpoints that your parents don’t want to risk the trip.

One teacher at the school finally took her 10-year-old into East Jerusalem and the child went through security but she got detained. The child was in tears throughout the ordeal. Imagine living where the rulers of the land have a demolition order on your house. Imagine you live in Canaan.

Israel can’t draw its own borders, the country is continually expanding. In truth the land of Canaan/Judea/Samaria/Israel is all the same tapestry. It is a promised land: which in my mind I transpose to a Land of Promise. How can we fulfill our Covenant as a People of God?