Rains Come to a Parched Land

I am ending my sabbatical with 4 days in Varanasi, the holy Hindu city, thousands of years old. Varanasi, maybe the oldest city in the world, is also known as Kashi, the City of Light. Temples, all 800 of them, light torches and ring bells twice a day. Shiva, the creator and destroyer was born here. Two daughters, the Varuna and Assi Rivers, join their mother Ganga at this place. The Ganges begins in the mountain streams of Himalayans. It is beyond beauty–and terribly damaged.

The river is the longest in South Asia and serves the highest population density. Flowing through 29 cities, it provides water to 40% of India’s population. Too bad Mother Ganga is treated like a septic tank–sewers, piles of trash, cows and humans take daily ‘dumps’ into the river. Diseases and fecal coliform rates are sky-high. Yet people daily swim, fish, and do their laundry. It is truly amazing how Hindis trust the health of their Mother, and I try to fathom such respect. During the two Hindu holy weeks, 70 million bathe in mother Ganga to ‘cleanse’ themselves. 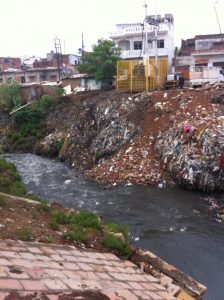 It is revered–to die here removes one from the cycle of reincarnation which means to my novice eyes, one obtains eternal peace. Thus cremations are common along the stone steps leading down into the bilious river. Several categories of Hindus are not to be cremated, including holy men, pregnant women and children under 10 years old. These are often thrown into the river with weights on the bodies. Taking a row boat north along the river, many lit candles that floated across, flickering spots of flame on the dark surface. The lights spoke to me of lost friends and forgotten dreams as the boatman rowed past the ancient ghats (steps).

The monsoons have started, rains pouring down every other day. Deep gutters carve through mud, flooded streets; but also the fresh sweep of the air, tree leaves with a waxy shine. Rain, rain, heavy rain, and change. My soul has grown weary from human cruelty, hate crimes, children condemned by poverty. But the change in weather lifts my plodding feet over all the dust and crap. 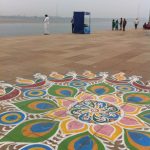 I feel a change of heart. I no longer dread my return to the US and the struggle for justice needed there. I still take breaks from the 110 heat, by dodging into A/C restaurants. I need to wage the battle for justice in my own country. The sludge of white entitlement, and the stench of plutocracy is uglier than anything that I’ve seen at the Ganges shore. And my work is more than writing letters to congress and standing in vigils. I long to enact ‘satyagraha’; I dream to stand beside the survivors of Orlando FL and Charlestown SC; I will work at staying emotionally present and upfront about my own privilege. Where can I find peace on this parched earth?

Attorney General Loretta Lynch told the trans community, also my community, “we see you; we stand with you; and we will do everything we can to protect you going forward. Please know that history is on your side.” 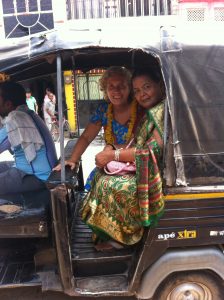 Minga with Friend Dorrin in tuk-tuk

So here I am watching the funeral fires, the men walking with staffs, the children swimming at my Mothers source. I slowly walk–stepping towards justice, the mystery, learnings about humanity unveiled. I’m headed home.