Some proclaim that peace is possible. Really? Where? Does it last? Quakers and Amish and some intentional communities have islands of peace. Some scientists think we can abolish war. I certainly pray for it. I thought our economy depended on war. Certainly our entertainment thrives on blood and feuds. Maybe abolishing war in 2015 is too grandiose.

Let’s begin with something basic for the next 5 years: Can we eliminate aggressive violence? This is not the same as establishing peace, but let’s start somewhere. Elise Boulding, a Quaker professor of Peace Studies, talks about a culture of peace, which seems distant, oh so idealistic. But over the last hundreds of years we have eliminated stocks, public whippings, flogging children in schools, etc. Are we creeping towards a culture of peace—can we edge away from a world of more violence?

I agree, over time, to keep peace one must work for justice. In my mind, structural violence and behavioral violence seem intertwined. Shooting or punching are terrible, and so is grinding poverty. But is the first step stopping the mass killing, or addressing racism? Can we eliminate behavioral violence, even though the absence of war is different from the presence of justice and/or peace. Babies are still hungry and women are illiterate? To put it bluntly, I’d rather have a hungry child than a dead one.

When the Allied Nations stopped the extermination, many Jews were still held for many years in squalid conditions in the Nazi camps. Many countries after 1945 (including the US) refused to accept Jewish refugees. 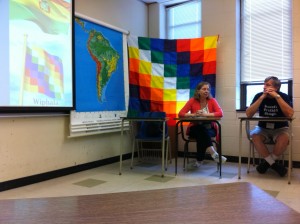 That was structural violence, but we had eliminated the outright murder in the death camps. Maybe I’m splitting hairs, but I’m sure that stopping nation’s aggression will give space for us to address poverty and oppression.

Quakers have adhered adamantly to the peace testimony meaning a renunciation of all outward weapons. The world in 2015 is so far from that stance, what could be a feasible change to help people to abolish war, or aggressive murder. Let’s explore what must happen, at a minimum, for peace to be possible. But what if we supported the UN using some form of violence in cases of statehood aggression. Personal violence is immoral, but Randy Forsberg believes in “defensive nonviolence”, where armed force is used only in defense. The military would be strictly and narrowly conceived.

After Vietnam, US military kept a force that is not drafted temporarily for one war, but a body drafted as a permanent part of US forces in peace time. The goal was to keep leaders in power who are friendly, or to a cynic, leaders who follow the US’s agenda. We know that Vietnam, Afghanistan, and Philippians are not about to attack the US, yet we want military bases there. We must get a UN agreement for the US to abide by international law. And that law should say that no country can invade another’s’ borders. The UN, not the US, decides when another country needs protection. 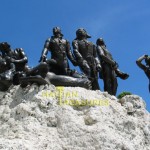 We know that families, neighbors, schools, morality of all religion says that murder is wrong. Why would we allow mass murder by our military? Let’s stop fooling ourselves. The military doesn’t protect us:  it encourages more violence in the world. Now that, is scary.