What is power? Power lines carry dangerous levels of electricity. Queens use a scepter of power. Between you and me, all human power is finite. Yet most power is infinite. Where can I tap into power to change my rubbery life? To change trash blown onto my street? To change my city so that you, me and the microbes thrive? Starhawk (if you never heard of her, look her up) speaks of power over which is the world’s power, associated with dictators, Popes, head honchos. This is the weakest of the 3 powers. A second type she calls “Power with” is the power of a circle, where all gifts and people are cherished. This could be a cooperative that builds a library or a community garden.

There is a third type of power which we need in these apocalyptic times. Starhawk names “power within” , a type of truth-based power with spiritual authority and the arch of a comet. How do Friends confront the evil of a despot or a military regime?

In the last five years I’ve focused my “inner light” or ‘power within’ to face evil. Bi-weekly I accompany those who are at risk for being deported. Why am I on fire right now? It’s mayors and ICE (Immigration Enforcement) deporting refugees that has steam coming out of my ears. ICE officers are henchmen for enforcing racism in our white plutocracy. I’ve worked to end this evil since I was 12 years old playing Red Rover with black and white kids. I have prayed hard with Quakers in stopping these evils. There are decades where I sweated over kettles in soup kitchens, I’ve sung inside prisons, I’ve written 1001 congress people, I’ve marched in 501 rallies, and I’ve slept in a tent at Occupy Boston. I withdrew from paying war taxes on April 15. When will justice reign? The Power is swirling within us and through us. How can we bend our finite power, to sing with the Power of Justice and Universal Love? I’ve a salubrious intent. Let’s weave both powers, that of Power ‘With’ and ‘Within’ that would make a chemist’s indestructible compound. That could cause a resurrection, one that Jesus would applaud.

“In any nonviolent campaign there are four basic steps: collection of the facts to determine whether injustices exist; negotiation; self-purification; and direct action.” stated Martin Luther King in 1965.

Wow. I’ve read Dr. King’s Letter from a Birmingham Jail ten times but I must have missed that third step. For five years I’ve been moving out of negotiation (endless pleading of Congress reps; joining 100,000 people at rallies) into direct action. Wait a second. Have I skipped a crucial step? What is self-purification before direct action? Some of us do it alone: we prepare by packing granola bars and medicines, reciting a prayer, meditating in the lotus position. This week in an Interfaith Nonviolence workshop we discussed this step. People wrote these ways of purification on paper leaves. These individual leaves were placed on the Tree of Life. (Rev 22:2)

Leaves on Tree of Life

Create in me a clean heart, o God– Psalm 51
Counting the Omer, offering grain as thankfulness. Second night of Passover
Walking the Second Mile
Lent/Easter as intentional active hopefulness
Vision of the Reign of God
Wage war not with outward weapons— 2 Cor 10
Creation rich source of meaning and complexity
Standing on the side with the oppressed
Be not afraid, Walk with God cheerfully
Ritual/united prayer done the morning of an Action
Stand still until the Inner Voice Commands you to speak, then speak with Power

The leaves were many and still budding after the  workshop. These leaves were helpful prayers. I drew a deep breath as if a breeze swept through a stale hallway. Something hard rolled away inside me. I opened to this third step of purifying. In the nuclear weapon race, in the Act-Up raging, Occupy WallStreet, SURJ/BLM, Sanctuary, Stop the SOA, in all of these movements I jumped from Negotiation, Step 2, to Direct Action, Step 4. 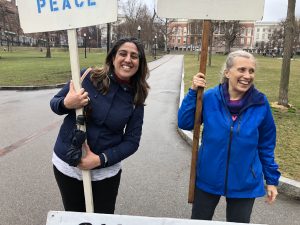 Peace activists offer us NV trainings without the purification step. Non-Violence Trainings entail lots of logistics/organizing/safety/legal support. All which are good since we are human, with limited power. And we can’t overlook Step 3, which is more than peaceful preparation. Step 3 include Inner Guidance and Right Ordering of Priorities. Purifying is an inner fortification for an outer action. The action then recreates God’s intention and can sustain us.

Without acting with Divine Love, our Direct Action will be a barren grapevine. We need green branches and unshakeable roots. We want a resurrection of a people, not just one brave rabbi 2,000 years ago.