I’ve been a student of nonviolence since before I cut my 12-year molars. Rather I, and you, have learned about violence since 1st grade.  We get inculcated by violence when we state the Pledge of Allegiance and recite stories of pioneers conquering the American frontier. I learned George Washington and Patrick Henry were patriots, not terrorists. Think about it. Aren’t all wars, including the American Revolution terrorist acts? How do you take up a nonviolent stand in 2011 while living in the bloated gut of a military regime? This great education system never taught me to question the USA’s avarice. 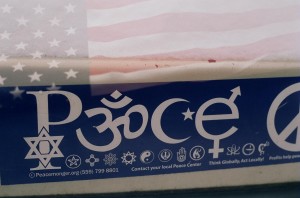 Have we been programmed to accept violence? Do we need to reboot the computer? We in the USA breathe in ideals like bravery… protection… defense.

I know that your bravery may be my fear;

Your protection may prescribe my poverty;

Your defense may interpret, for me, an attack.

I’ve been practicing nonviolence in fits and starts since at least as long as I’ve heard about Jesus. My Quaker faith community has been my coach, team and referee in the game of life. In public school and in the living room and sports field I ‘ve dabbled in nonviolent skills. I bet you have too.

I’m not a NV saint. Don’t ask what authority I have to teach love and charity.  In fact in my lifetime I’ve stolen, I’ve lied, I’ve cheated and I’ve done drugs. I’m not proud of it. Despite a life of privilege, 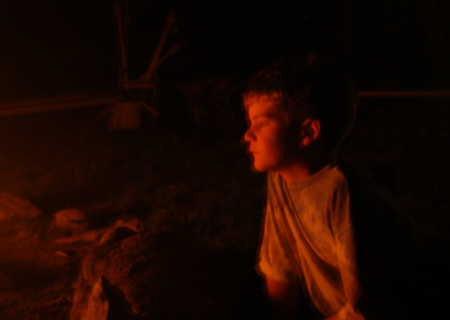 I’ve had some hard times, sleeping on park benches and hitchhiking across the country. In an earlier post I por trayed AVP, a unique program where inmates focus on Stopping Violence. I can hear my Dad tease me, It Takes one to Know One. But, seriously. Can each of us build a reservoir of stories? The following is a story of violence prevented–

One military man went from discharge in WWII to join Quakers, adhering to principles of NV. Paul started working in the 1960s for soup kitchens. One time in Boston he was serving breakfast at the Catholic Worker kitchen. The line was long and the room was crowded with hungry men. Paul cut the line in two and explained that the second group would have a sitting in 30 minutes. One man asked Paul if he could enter just to hand something to a friend. Paul agreed as long as he left immediately to wait his turn. The man came in, gave a bag to one friend and then started talking to two others, passing bags. Paul could see that the man was dealing some drugs. Paul, without a plan, went up to him standing between tables and said. “You have to leave now. Time to walk out the door.”

The man turned angrily at Paul and in a flash had pulled a knife and stuck the point right under Paul’s ribs. Paul was paralyzed. He was speechless. The entire room became as quiet as the opening act at a Shakespeare play. Somehow it occurred to Paul to ask, “Are you thirsty?” The man nodded, not able to say Yes. Someone passed a drink of coffee to Paul and he offered it to the man. As he drank the knife lowered. Paul says he can only think that it’s God who gave him the words. But we say such presence doesn’t just come from the unknown, it can be practiced.

Why would one take an heavy dose of Alternatives to Violence(AVP)? More people I know take time to practice Pilates than NV. Because it gives stepping stones on how to love when we disagree. It teaches me respect. It shows me ways of buying wine or innocently stockpiling food are hurtful and maybe violent. Because many Christian churches are sappy sweet without offering ways to step over (or around street violence). White churches in rich areas don’t even acknowledge the violence. All Religions that preach compassion, justice and simplicity aren’t offering strategies out of cycles of violence. Who is eager to debate NV techniques? It’s  not Pentecostals, Jewish temples, or Trinity churches. A community hungry is the MA prison system. 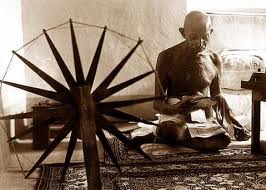 Working on Alternatives to Violence helps me and is useful for everyone, because we all do acts of violence. All of us. There’s white collar crime, and fisticuffs violence. Tell us your story of witnessing violence and what happened to diffuse it? I’ll happily post pithy stories. Isn’t emotional violence more pugnacious than physical violence?  I’d argue that when you hurt me; you, at some level, are hurt as well. So we all need AVP. Even Quakers are pushy, inarticulate, and provoke anger. Many Quakers think we have a leg up on practicing nonviolence, but we’re better at avoiding conflict than resolving violence. AVP does a great job looking at what is manipulative and what is aggressive action.  May we each make one step toward attaining Gandhi’s vision of peace, since this is the Great Soul’s birthday on Oct 2nd.