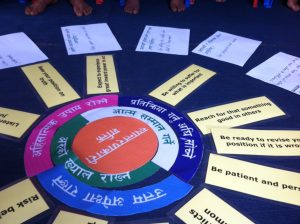 So what’s different about doing AVP in Nepal? Alternatives to Violence is very needed and very welcomed in this country. Nepal, lying on the backbone of the world is wedged between 2 military giants: China and India. Nepal is around the size of New York, although it takes over 2 days to travel across east to west. AVP started in Nepal in 2006. Nepal will host the AVP international gathering in Nov. 2017. AVP leaders are excited to welcome peacemakers from 40 countries here. It’s a dream come true. 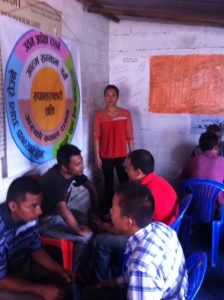 I offered an AVP workshop this week at a program, Clear Vision, for men who are recovering addicts. We had three outsiders join us including a woman from New Zealand. I learned new exercises and new ways to build community. Nepal AVP opens the session asking everyone to shape a pipecleaner into something they have to leave behind in order to be fully present at AVP. All the pipecleaner designs are placed in a basket and can be picked up at the end of the workshop. (I know, pipecleaners would not work in prison.)

The role plays were magnificent. One drama was a conflict between two different households when a government official knocked on the door to deliver earthquake aid. The conflict was that one family was on the list to recieve goods, but the other family wasn’t. The first family needed the hand-out, but was willing to give all the government supplies to the second family. Why?– to be neighborly, build community and be fair. The father grumbled but said something about farming harder this year. The second family had a wife (played by a man) who eagerly accepted the gift and in all honesty told the official that the family needed more. After each drama, we ask questions of the actors. The wife actor admitted that she wanted as much money as possible. The group laughed. I asked if the other actor if he really was an official, would he act fairly. He admitted that he would probably not. Instead he would pocket the money himself, as he hears most of the government workers are corrupt. 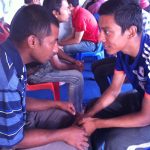 Another role play was about a high school girl running away with a youth; another about a traffic inspector asking for a bribe; another about two men in rehab punished harshly for smoking cigarettes. This Nepali group was also concerned about gender inequality, inept government; domestic violence; drugs & drinking; poor schools & expensive health care.

There are many talented Nepalese facilitators. The materials developed were wonderful, so organized with poster papers, photos for a gallery, and envelops for the broken puzzle exercise. The Nepali coordinator is thorough and eager to bring the other faciliatators into organizing roles. This commitment to share leadership is critical as Nepal ramps up for the 2017 gathering. 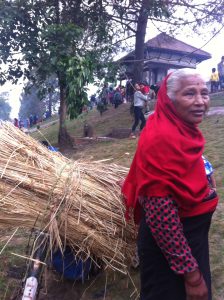 AVP is a volunteer organization. This is heart-work, and our reward is seeing a community based on respect and caring. But I’m noticing that many AVP groups continue doing many Basic workshops Without advanced workshops and without training new people we become stale and crusty. We need to develop deeper skills and work under the discipline of forgiveness, trauma healing and reconciling with our enemies. With every AVP workshop we facilitators need to take one concept and run laps, lift weights practicing that concept in our daily lives.

We talk about structural violence on the Tree of Violence, but what are we doing to stop the growing tree as an AVP group? A facilitator on fire with how the spirit transforms us, is contagious. AVP needs to support one another to live closer and closer to the 12 Guides. All facilitators need to recommit to using transforming power in our own lives. Can we ask hard questions of our fellow facilitators? Can we show love to facilitators who annoy us? 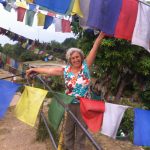 Do you agree with me?