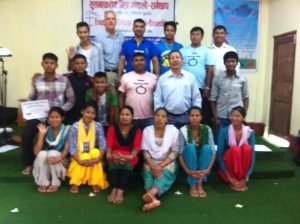 We facilitated an AVP workshop in Ramecchap Nepal for 18 Evangelical Friends. These Friends are not used to workshops on peace, social issues or self-esteem. The church has no running water nor chairs. But these Quakers were very savvy about social justice. They survived an earthquake; they heard about the generous world-wide donations after this disaster, and they knew that this money wasn’t distributed fairly. 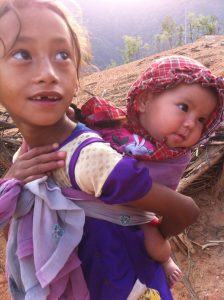 These friends are not scholars, but they are wise in the ways of structural violence. They are fishermen and farmers living where the rivers run more and more turbid and the soil is too rocky to support crops. They live on steep mountainsides with frequent landslides. Nepal government released $150 for any earthquake family victim. Now the monsoon season has begun and the government’s many promises to disperse the international aid has not occured. Fifty years ago people in Ramecchap lived with milk and honey, their land a jewel. Now, what are they?–the salt of the rumbling earth. 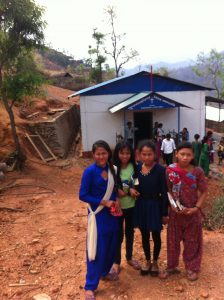 The three-day AVP workshop was done at the Friends church. Churches in Nepal can’t own property, (whereas all the Hindu temples are public owned by government). Many Ramecchap houses were destoyed in 2015. Walking through town, watching children and women pumping water at the well, I saw the taller houses, had the first floor intact, but the second floor had fallen walls, or huge cracks with no roof. The Ramecchap congregation met in a rented house in 2015 but the owner reclaimed that building.

Ramecchap Friends built a new church with funds sent mostly by Friends around the world. For two nights, Jonathan and I with four other Friends slept on the floor of the church. It was a bright, strong building but not the most comfortable. We had no toilet nor chairs (during worship all sit on floor), but there was a drum, guitar and working electricity. My bag of clothes was left in Kathmandu so I had no extra clothes. I took a birdbath under the stars. The Nepali usually go to bed before 9 pm, the sun is up in summer at 5 am. 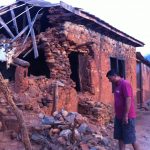 We took a risk organizing this workshop. Australian and European Quakers introduced AVP (Alternatives to Violence Project) 10 years ago to Nepal. Connections between Australian AVP Friends and Nepali Friends were not established, and AVP was not offered among Nepali Friends. This was the first one and we hope that from the 18 people attending, some will become facilitators. Currently in Nepal, no AVP facilitators identify as Christian.

The workshop was familiar yet difficult. Jonathan likes to claim it was the first AVP workshop where the lead facilitator wore the same clothes three days straight. We paid for the program as a gift to Friends. The monsoons here have begun but the Ramecchap new roof held strong, and after the animals were secured nearby, the workshop continued through the drenching rains. 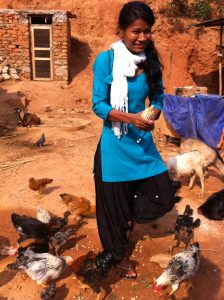 The Nepali Friends were delighted to work the AVP program seeing justice and Christ’s message as one. In AVP we take Jesus’ requests to ‘Love your neighbor’ and ‘love your enemy’ and practice ways to do that. The Nepali Friends saw that we need to perfect our personal transformation to be kind, to forgive, to give generously. And they were simultaneously aware of government corruption, ethnic fighting, environmental deterioration.

Bishal (15 years old) said the in loving the enemy that’s the only way we can have security. Anther said “if you hate another, you are acting like an enemy to them and the enemy spirit lives in you. I need to look at all people with wise eyes.” A woman said, “before I can love others, I have to change myself and remember humility when I face an opponent.” One man, Gopal, said his goal in life is to translate the Bible into his language, Maaji. I have learned much about how social/economic opportunity has to be interwoven with conflict resolution. One can’t just teach reconciliation or steps to resolve a dispute when the person is desperate about education and employment.

Friends worship every Sat; Sunday is a workday

I travel in the ministry working side-by-side with Friends. I am passionate at bringing the Living Word of Justice alive. I have much to learn. This student of peace thanks the American and Nepali teachers.