Occupiers, like our sisters/brothers in the Arab Spring are determined to spring forward with democracy. The Occupy movement is making a difference. We have delayed the XL  pipeline and fracking (hydraulic fracturing). We are shaking down the US oligarchy, the US plutocracy which is no less than a plutarchy. (Don’t you love my newest vocab word?–plutarchy?)  The tectonic plates of the Middle East are changing. I am seeing a surprising Spring in the West. 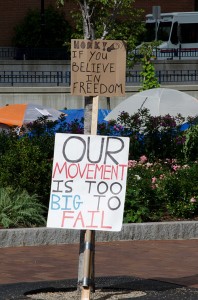 I go into a General Assembly of OccupyBoston (OB) and see tall, short; curly and straight; pale and dark-eyed. Some, with a smile, are more polite to me, some are bluntly more honest with me. I like it. OB has a friendly grittiness.

I write about OB to focus our lens on 3 issues: decision-making, image, and tactics. As a Quaker wedded to equality, I’m the last to complain about OB’s commitment to consensus.  Occupiers and Quakers use 2 variations of consensus: both are sticklers for process. For instance if you overspeak in Quaker Meeting, the room becomes full of porcupines, with quills about to dart.

What form of decision-making is fair?  As Process Queens OccupyBoston spends a lot of time accepting every proposal (value of egalitarianism), putting 3-5 proposals on the ‘stack’ each general assembly (1st working groups and then individual proposals). Thirdly, Occupiers scrupulously deal with anyone who ‘blocks’ a proposal. Blocking can be mostly an attention-getter for those who disagree. But blocking a well-reasoned and well-seasoned proposal is a serious move.

Blocking isn’t baring your teeth or growling because you disagree.  You block because the proposal is damaging, like a bear trap that will hurt. Examples of blocking consensus is when a march excludes trans gender folks or a proposal asks for money already assigned for the May 1st strike. If I don’t want to participate or I am ambivalent about pouring blood on the floor of a bank, that’s not a reason to block. If 10% or more are on principle opposed, then the proposal is sent back. Then there are clarifying questions, small group discussions, objections, checking to see if there’s a 75% in favor, adding friendly amendments, going back to clarifying questions, and trying again for 75% approval. 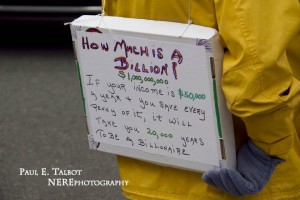 At OB General Assemblies, we need to find a less time consuming way to communicate our ideas. Yes, work on decision making, and find ways during General Assembly to anchor our trust and common values.  Consider whether anonymous masked people with black robes at a public hearing on cutting transportation communicates the right message.  Of these values: creative, distrust, solidarity, dead-seriousness, freedom, child-friendly, I don’t think the Direct Action black disguise communicates what we want. The Guy Fawkes disguise at OB reminds me more of Darth Vader than Dan Berrigan.  Guy Fawkes was hung in Britain after trying to blow up the Parliament. Does he stand for revenge and retaliation?

I have another bone to pick with my sister Occupiers. What is this commitment to a diversity of tactics which overrules a commitment to no violence? Why don’t we have both? We can shut down military recruiter offices, start a love-fest in the JP Morgan lobby, and send Scott Brown a gallon of tar sands crude oil for his birthday. There are soooo many tactics. Of course we want diversity. Nonviolence is more of an approach that says, I will not harm another being. I will preserve the sacredness of all life. Is this confining? I think not.

The cliché, ‘God Bless America’ echoes of patriotism and supremacy. The Occupy movement shakes us off the altar of nationalism. I honestly fear that collective patriotism becomes fascism. We have changed the discussion away from butchering public transportation in the MBTA, we have stopped for a while nuclear energy and odious oil pipelines.  We 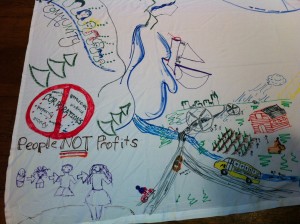 Occupiers live in an orchard with exotic seeds and nutty doctors. We are apples and pears; mangos and papayas. I am a nonviolent Quaker, and I want us all to grow. When I tell Dick Cheney or Whitey Bulger you can’t Occupy the orchard because you are evil, then I’m an OB snob. We welcome kiwis and watermelons. If the watermelon rolls over my strawberry, then OB has to restrain the watermelon.  Welcome melons, immigrants, circus acts and donkeys. And an absolute whistle-blowing to any violence committed.

Anarchy arises with the Occupy movement, and has been a vocal voice for centuries. Here’s a poem by Shelley written as a tribute to the British citizens after Manchester massacre. We are all dependent on ‘one mighty mother’ which is the movement, the homeland. Notice the poem names slavery as an echo of our own name. (stanza XL). Are we are slaves to a tyrant today? Isn’t the 21st century tyrant Bank of America, or the corporate personhood laws our demise?  Huxley called the tyrant “big brother”, Yippies and Southerns called the tyrant ‘The Man.’  So the last ringing stanza is a clarion call for the Occupy movement:

“Men of England, Heirs of Glory,
Heroes of unwritten story,
Nurslings of one mighty mother,
Hopes of her, and one another,

“Rise, like lions after slumber,
In unvanquishable number,
Shake your chains to earth like dew,
Which in sleep had fall’n on you.

“What is Freedom? Ye can tell
That which Slavery is too well,
For its very name has grown
To an echo of your own.

“‘Tis to work, and have such pay
,As just keeps life from day to day
In your limbs, as in a cell
For the tyrants’ use to dwell:

“So that ye for them are made,
Loom, and plough, and sword, and spade;
With or without your own will, bent
To their defense and nourishment.

“Ye who suffer woes untold,
Or to feel, or to behold
Your lost country bought and sold
With a price of blood and gold;

“Let a vast assembly be,
And with great solemnity
Declare with measured words, that ye
Are, as God has made ye, free!

“Be your strong and simple words
Keen to wound as sharpened swords,
And wide as barges let them be,
With their shade to cover ye.

“Let the horsemen’s scimitars
Wheel and flash, like sphereless stars,
Thirsting to eclipse their burning
In a sea of death and mourning.

“Stand ye calm and resolute,
Like a forest close and mute,
With folded arms, and looks which are
Weapons of an unvanquished war.

“And let Panic, who outspeeds
The career of armèd steeds,
Pass, a disregarded shade,
Thro’ your phalanx indismay’d.

“And that slaughter to the nation
Shall steam up like inspiration,
Eloquent, oracular,
A volcano heard afar:

“And these words shall then become
Like Oppressions thundered doom,
Ringing through each heart and brain,
Heard again–again–again.

Rise like lions after slumber
In unvanquishable NUMBER!
Shake your chains to earth, like dew
Which in sleep had fall’n on you:
YE ARE MANY-THEY ARE FEW.