Quakers have joined in the Poor People’s Campaign (PPC) for these last two months. Every Monday for 5 weeks, we have gathered near Boston Common. Yes, Friends were ruffled and hot. Yes, Friends raised their voices against the liars and gluttons in our tattered democracy. Moreover, Friends burnished divine power to heal oppression. Our cry echoed MLK’s PPC.** The Poor People’s moral compass points to Repairing the Breach. Yes, Friends illegally crossed into the streets. People took risks by forming a string of human pearls between the poor and the thrones of power. On different Mondays, Friends joined 15 others who shut down streets around the statehouse. 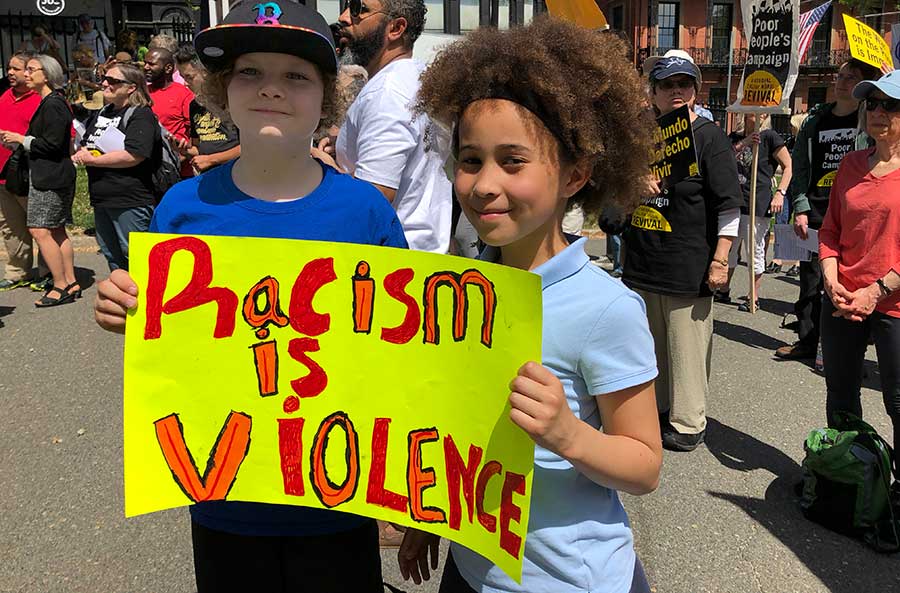 The PPC offers cheerfulness combed with righteousness—it’s a gala affair. What’s the point of getting arrested if 1) You are not willing to suffer society’s consequences of doing (jail) time 2) Your only goal is to change a law when a whole magazine of injustice is at work. The purpose of doing time is to bring about a blessed community that includes fair sharing of our food, housing, water, courts, our lives. If you’re coming to the PPC to block streets and continue business as usual, then we are dilettante activists. If we’re changing our lifestyles and opening our hearts to the poor, then we approach heaven. We don’t sit in the streets to trespass, but to follow a higher law. It’s the law of protecting the vulnerable. It’s the law of love.

On Monday, June 11 we were eight Friends who gathered for public worship sharing 30 minutes before the PPC began. We gathered 3 weeks at the Statehouse, under Mary Dyer’s gaze. An bright seagull razored above the Boston Common. Tall maple trees shaded us as we sat in a square with Mary Dyer towering 6 feet over us. The sun was hot as the city traffic wheeled by. Just as the silence filled the fenced courtyard besides Mary, a tour trolleys spoke on a mic to the tourists, “…statue of the Quakeress, Mary Dyer, who was hung by Puritans, 1660, for religious freedom.” Our worship isn’t at a gravesite, nor is it ancestor worship. Mary Dyer reminds me to be vigilant, I don’t want God’s revolution of poor people to pass me by. I’m praying for all of us, rich and poor. Hear Mary’s resolute words to the Puritans, “You cannot Destroy this holy Seed by murdering me. I don’t plead for my life but persuade you to stop your Wicked Ways in Love to your Souls.”

Even with the noose around her neck, she didn’t fear death, she was feared that the Puritans had lost their souls. Mary, in her eternal state, maybe heard the echoes of our song 355 years later,

Does this larger-than-life Mary hear other voices singing where she was hung?—,
We are fighting for our lives….and before this campaign fails
We’ll all end up in jail.

From a bird’s perspective we were not the sharpest specimens. As we settled in holiness, I saw one of us was limping, another had an arm in a cast. I knew a Friend here was dealing with cancer, another whose daughter was chronically ill. We are complicit, and we are in need. I feel the pain, and I ask Spirit to transform it. Friend Diana in worship of civil rights movement, and how its sacredness wraps us today. Friend Jonathan spoke of how the Statehouse (and Boston Commons) with its plethora of revolutionary statues, has no statues honoring Native People. With arrogance, our patriotic leaders ignore the “People of the First Light.” God help us. It is a Breach that is as yet unrepaired. Gail Rogers wisely described the purpose of the PCC is to stop the exploitation in the US.

Why am I part of the PPC? I’m doing it for my 18 year old niece teaching young girls in Thailand; for the Philippian lesbian in Boston who wants to die; for some Quakers I know who struggle to make ends meet would do somersaults to work for $15 an hour; for a client of mine who needs to get treatment for depression but doesn’t trust our health care system, for a friend who spent 20 years on the inside and works 5 low paying jobs to pay the bills. All these people are in my circle. Jesus doesn’t mention the evil of ‘racism’ per se, but he mentions dozens of time the evil of too much, of hoarding, of being rich in the midst of poverty. I cried on Polly’s shoulders at the Statehouse on June 11 thinking of them. I cried wondering how I will survive. Am I only fighting for my own life, or am I willing to suffer for the truth (jail, physical pain, etc.)

Mary speaks bravely to the Massachusetts authorities, “I desire you to repeal the unrighteous and unjust laws … of death made against servants of the lord. ….in obedience to the will of the Lord I came and in His will I abide faithful to death.” Honestly, I don’t understand Mary’s witness. I don’t think God requires us to die in order to stop gluttony and gratuitous violence. What are you willing to go to prison for?

I want to live up to the promise of the Tree of Life with fruits for all †o eat and with its leaves for †he healing of †he nation. (Rev 22:2)

**50 years ago, 1968 MLK PPC called for a “revolution of values”. Today’s PPC reflects that spiritual uplifting of those without voices. This multi-faceted campaign including Labor rights ($15/hour); voting rights; immigrant issues (aiding families crossing border); war economy (stop weapon sales); and ecological devastation. Fannie Lou Hamer said, “I’m sick and tired of being sick and tired.” I pray that the Repairers of the Breach spreads among with many leaders, thanks to the initiative started by Rev. William Barber’s 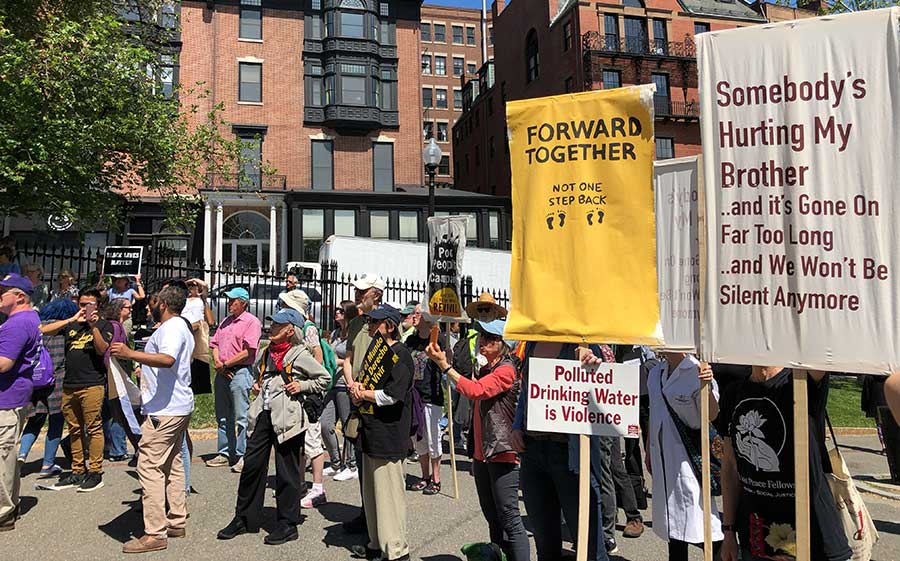