Looking for a Beauty Queen? 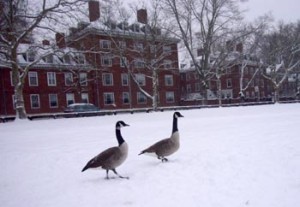 Did you come across Cambridge’s beauty queen this week? She is a regal site with a Guy Fawkes mask and leather feet. Strolling by the Charles River in December is feasible while balmy breezes punctuate the NE climate. From pre-dawn to sunset the river hums with hawks, drills retooling bridges and crew boats with thumping paddles. And then in full force is our Charles Beauty Queen.  She struts along the riverbank with other Canadian geese. She is a symbol of rich food, a land of bounty, filling the evening sky with bassoon-like calls, a master of aerial navigation.

With their slender neck and masked face, Canadian geese usually alternate between resting on water or munching on grassland. Females brood on nests in April. Watch for a gander standing guard near the clutch of eggs. Geese are remarkably amiable neighbors, rarely angry at the thousands of humans that pass by. But watch out! If you cross a gander protecting the nest, the gander will explode into shrill warning, like a loud trumpet in HONKFEST. The gander charges while hissing and glaring, but rarely attacks. The charge is a flurry of webbed feet, waggling tongue and beak tough as a battering ram. If you turn away the gander staunchly resumes his watchful stance, a faithful mate and dutiful father.

Golfers, swimming pools and park rangers consider these marathon flyers to be pests. Dogs become fascinated by geese. I saw a woman in a short skirt reign in her lovely Rottweiler by Magazine Beach. When he saw 2 geese plucking the soft grass as the canine strained on the lease. The owner tottered and pulled as if she were reining in a mainsail. Off balance, she lost her grip on the line and the dog bounded away, a windmill of legs and pumping jaws. But the geese lifted their solemn bodies skimming the parkland, without the predator coming close. Geese are graceful, with less litter than dogs. And to beautify parks, geese poop light green, mostly grass.

Canadian geese on the Charles have 2 separate populations, those that migrate (1000-2,000 miles) semi-annually, and those that the state calls resident population. Our permanent residents descend from the by-gone era of Canadian geese who were kept as living decoys by hunters outside of Boston. Captive geese were outlawed about 1935, and the geese were then released. Why? Humans released flocks carelessly, not knowing the impact. After jailbreak, the geese never regained their navigational memory, and nested in Massachusetts year round. By 1975 the resident geese in MA reached 75,000. These grazers are known as illegal immigrants, as opposed to their migratory geese, our eat and run guests. Golf clubs in MA have sought permission to shoot hundreds of these vegans who come to trim grass on golf courses (and poop green slime). The putting green is not a restaurant.  Animal rights activists will protest these killings saying “No blood for Golf”. Other golfers use the expression, “fowl play” when cleaning the soles of their shoes.

The flocks of geese aren’t hazards; after years of human captivity they neatly share our city. The goslings will float in a line behind their guardians in May, in September we’ll watch the lazar-black wings cut through the sky. In Cambridge by the shore, geese will lift their head if a hawk lands on a limb or if runners bounce past the flock. Often the geese let me run within 30 inches of them if I look straight ahead. Their black beaks glisten stamping their intelligent faces dark with ebony like a A# on a piano. Their calling is gentle cooing (not just honks), their excrements are fertilizer (not kaka) and their parenting is excellent (hence, the overpopulation). We can’t raise farm animals in the metropolis, but just around the corner are free-range birds. 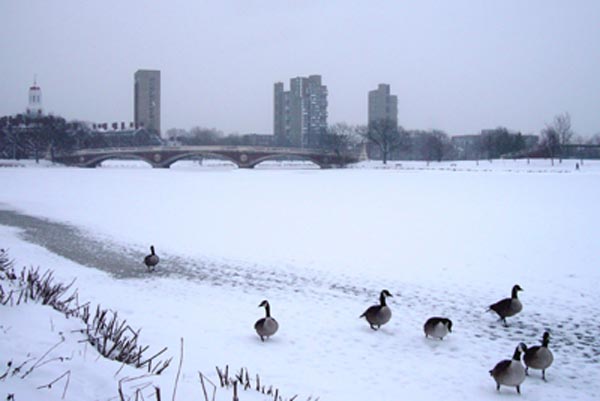 They are homey yet wild; friendly but protective; gorgeous but not ostentatious. They are our indomitable beauties. These neighbors, in the air or on water, augment our city lives.

What ways are we being responsible to our habitat? Humans without forethought, build nuclear plants near our waterways, while our houses drain their runoff into rivers.  Factories and industries have poured years of pollutants into the chestnut waves of the Charles. Oceans have dead-zones. Now the sediment of the Charles riverbed is a glut of copper, lead, and petrol mixed with excess sand and gravel. Fish don’t want to sleep on that sticky mattress.If you are mad that the state’s budget cuts prevents funding the clean water bills in Massachusetts; if you are dismayed that Draper Labs in East Cambridge still makes nuclear reactors; if you are frozen in fear that nuclear radiation will leak into potable water like what happened in Japan, listen. There is hope. You don’t have to wait until Earth Day to clean our rivers. www.crwa.org/index.php  or https://www.thecharles.org/

Without toxicity, our birds will preen and parade down the Charles River as if we were rolling out the red carpet. Cleaning the river shows respect to Beauty Queens more than a first prize.