Sarah and Abraham traveled from Ur to an unknown destination to find a better life. Later Abraham’s children settled in Egypt due to a terrible famine throughout the land and were guests of the Egyptians. In Bosnia hundreds of families emigrated to the US, during the hostile devastation of their homeland. From the Irish coming during the Potato Famine to the Lost Boys of Sudan, there are many instances of US Christians opening their homes to economic or political refugees. 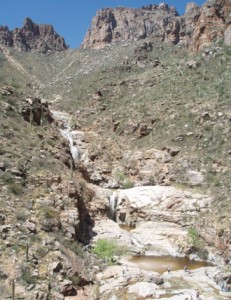 Today we face another crisis– what about the immigrants risking their lives by crossing the Mexican border. We have a combination of Brazilians, Salvadorans and Mexicans pouring across, thousands every month. What are we to do with them?Â  I found that people of faith are divided as to how we are to invite and welcome these other citizens who choose to travel so far from home.

I came to the Desert in April to understand the stage where human trafficking has been increasing since 1994. The number of injuries and deaths happening on our borders has multiplied. In 1994 the INS began to militarize the Mexican border. Border Patrol were hired to enforce Operation Gatekeeper in San Diego and Hold the Line in Texas. The government capriciously calls these campaigns prevention through deterrence. But in reality they are deterrence through death. As Boeing and other companies try to build the electronic fences and the physical walls, the migration across the border changes. It doesn’t change as one would expect, in decreasing the volume of entrants. But instead of traveling near populous areas, the bands of immigrants are forced to scatter over the most inhospitable desert areas.

This is the place where President Obama decided on May 26th to send 1,200 troops. He wants Congress to authorize $500 million to increase the military presence at the AZ border. Sen McCain is asking for 6,000 troops on the border. Instead of spending money on the Dream Act, they want to increase the number of sharpshooters. This will increase the deaths. Latinos crossing the border aren’t deterred by patrols, they just pay more money to the coyotes who smuggle them across. The fence is just a strand of barb wire in some parts of the 2,000 mile border. The wall was built in the populated towns, like El Paso and Nogales. So with the wall, campesinos are driven to run through the abandoned areas of rough terrain and jumping cactus. Some come dressed for a freedom ride to Phoenix, they have on dress shoes, without blankets for nights nor hats for days.

The Sonora Desert is a beautiful and deadly swath of land. It covers southern and western AZ. It is south of Phoenix and east of the Mojave desert and extends south of the border from Nogales sweeping towards Baja CA. The mesquite trees like an umbrella of yellow bloom in April. The prickly-pear cactus and sage dot the chalky adobe. Spring starts in AZ in February and lasts until April. In May and June the heat is suffocating, often soaring up to 115 F. The ground is rocky or gravelly sand, the desert bushes are prickly, thorns adorn the cactus, scorpions and snakes. It’s difficult to walk even with sun protection, food and liquid.

I stayed in Tucson, hiking outside, avoiding traffic. The Sonora Desert eerily doesn’t seem like the US. AZ laws and schools are different, clocks don’t switch to daylight savings time. Sonora Mexico is distinct from Mexico too. It’s economy and police are focused on the migrations of workers headed to the US. The border isn’t AZ, USA isn’t Mexico, let’s call it Mexizona. Obama’s militarization of Mexizona takes it to a new level. He’s pouring money into a militarized zone (as opposed to a DMZ), instead sending money for health, food production and education.

I wasn’t altruistic, I had many questions. needs. I sojourned to find a new path in my clouded New England wilderness. I was in a dark place-apathetic and angry. Why? My Dad had died 8 months ago, feeling my own brittleness. What had I done with my life? Was I a living testament to the wonder that I felt just savoring a peach? Things I love were feeling stale.Â  Running by the river at dawn was… well, blah.Â  My children were leaving for college, my work at the hospital is in jeopardy of closing. I am in existential crisis. So I took off, left my good family and the internet behind.

This corridor is an obstacle course for a lot of human travel.Â  Maybe Mexizona is an exodus of people leaving the grueling poverty to a land of milk and honey. America is known as the land of opportunity, but not the promised land. The years wandering in the desert is a zone of danger. Your freedom in the wilderness comes while running from the rifles of border patrol. IF the gun doesn’t nail you, the heat will suffocate.

I found Holiness and Grace in the desert. The following groups are all present, some of them I met. Some good Samaritans are: New Sanctuary Movement which includes CluE Clergy and Laity United on Economy; Interfaith Workers Justice IWJ. There’s Borderlinks, Humane Borders, No Mas Muertos; and Coalition para Derechos Humanos. And this is just what I saw during my Easter visit. 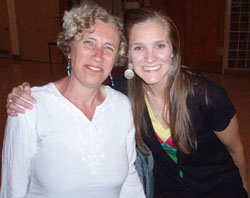 This seems like as many groups as the do-goobers helping Haiti rise up from the earthquake. I’m just a gringo-girl, what do I know? I saw Christians and college students and retired couples coming to give water and shelter and hope. Many courageous people are helping these nut-brown sojourners who knock at the US door. May we rise out of our morass. Next blog I’ll mention how.