This March, the US and Europe entered into the Libyan civil war. Western civilization has a long history with Libya and only a pittance is studied in classrooms today.Libya plays a stellar role in ancient mythology. Does Libya play the dark cousin to Greek and Roman philosophy?

Five thousand years ago, Libya was covered by lakes, forests, and grasslands. 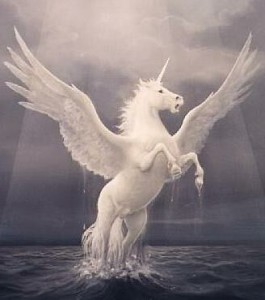 Now itâ€™s 90% desert with nomadic Berbers. Eastern Libya in 500 BC, with its famous 5 cities (near Benghazi), was a magnificent mecca for fine arts, learned academies and medical schools. Can we appreciate the magnificence of this civilization where we currently drop cluster bombs? During the Roman Empire, Tripoli reached a golden age about 200 AD. Tripolitania and Cyrenaica were part of a cosmopolitan state with language, Roman forums and legal courts. Libyans exported olive oil, wines, horses and ivory to European cities. Libya has been ruled by Greece, Rome, Turkey (Ottomans), and Italy. Finally in 1952, the UN declared Libya to be a sovereign nation.

According to the Pelasgians (who are early Greeks), the goddess Athena was born in the womb of Lake Tritonis in Libya. How fascinating. I found that Athena, Medusa and the magical horse Pegasus all were born in Libya. Athena was raised by three nymphs there. Tritonis means Three Queens or the Triple Goddess. Was she Libyan? According to an ancient tradition (Herod, Apollon), a nymph of Lake Tritonis in Libya and Poseidon were the parents of Athena.Later Greeks claim Athena sprung full-grown out of Zeusâ€™ head, after Zeus swallowed Athenaâ€™s mother, Medea aka Medusa.

What about Medusa? She also lived in Libya, which in Homerâ€™s time meant the land west of Egypt. We are taught only that she was a fearsome gorgon monster who turns men to stone. She was a power house and a ravaging beauty. Medusa means â€œroyal female wisdomâ€ in Sanskrit. Libyans worshiped Medusa and Athena. The earlier stories from Libya show Medusa with snakes curled around her waist, in a sacred knot. Snakes refer to healing like the spiral snakes formedicine Athena was a warrior and also a symbol of wisdom. Athena punished 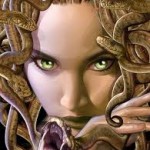 Medusa. Her dred locks turned to snakes, her beauty to a hideous face according to Homer. All who look at her directly turned to stone (as happened to enemies of White Witch in Narnia).

Perseus, on a quest, beheaded Medusa and bags her head as a trophy. But the myth has 2 interesting births from her beheading. First, at her death, the winged horse Pegasus is born. Second as Perseus flies over Libya, blood drips from Medusaâ€™s severed head. Drops of blood become poisonous snakes infesting the Mediterranean coast of Libya. The horse, white with bright wings, carries off Perseus who delivers the head to Athena. Death does not defeat Medusa. She retains the power to paralyze others (stonewall them); even in death she gives birth (a horse).

Fast forward 3,000 years. In 2011, NATO has entered into the fight of a desperate dictator with Tomahawkmissiles and GPS guided bombs. Why? We are not on a humanitarian issue, there is no threat to the US. Obama says, â€œWe are answering the calls of a threatened peopleâ€ and he claims that â€œitâ€™s for the good of all.â€How can I believe such pig slop? Itâ€™s clearer every day that our stage entrance 6 weeks ago in Libya ago was to wage war against Muammar al Gaddafi. Gaddafi has been in office since 1969. Many Libyans want him to exit. But under what authority can NATO bomb a proud leader, a senior citizen, and the father of 8 kids. We have bombed his compound several times, and killed his grandchildren. We bombed his compound again in May 2011 with the death of his youngest childSaif al-Arab.

Stephen Hadley, former national security adviser warned against the assassination of Gaddafi. “The narrative we want to come out of this is that the Libyan people overthrew a dictator â€“ not that the UN toppleda despot,” he told CNN.

My plea is that the US let go of bullets and bombs. I plead for respect. I plead that we stop turning our children into murderers of strange people. Can the US stop dropping blood which turns the land into a place of plague. If Libya is filled with writhing snakes, itâ€™s the snakes of European missiles. England, Italy and France sell millions of weapons to Libya. Now we are sending troops to Libya to be killed by those exact same weapons. NATO is strapped alongside its own weapons, rather like suicide bombers.

The US and its allies are re enacting a long battle of murder. We are not under Athenaâ€™s orders to kill any monster in Libya. We have spilled blood in the dessert. Our moral compass is lost in the Libya and the Middle East. The people cry- Get NATO out of Libya. We are not rescuers in Libya.Â  Letâ€™s fly out of there. Let’s transform our venomous weapons into winged horses. Like Icarus NATO has too much hubris flying so close to the penetrating North African sun.