Her Peace was more than Trees 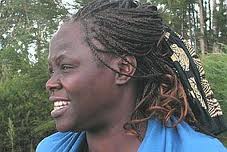 “Wangari’s concern for the planet was drawn from her deep concern for humanity. It was very clear to her that for humanity to thrive, our planet had to thrive! For our children to be healthy, our environment had to be healthy. She held the strong view that if we learnt how to manage our natural resources, we would learn how to manage our countries.” Says Miriam Were, a Quaker doctor who counted Wangari her friend.

Wangari Mathai was a great Kenyan leader who died last week age 71. “In the course of history, there comes a time when humanity is called to shift to a new level of consciousness,” she said, “to reach a higher moral ground. A time when we have to shed our fear and give hope to each other. That time is now.”

Mathai was the first African woman to win the Peace Prize. The Nobel committee in 2004 called “her contribution to sustainable development, democracy and peace.” It was a moment of immense pride in Kenya and across Africa. The Nobel committee hailed her for taking “a holistic approach to sustainable development that embraces democracy, human rights and women’s rights in particular” and for serving “as inspiration for many in the fight for democratic rights.”

Her Green Belt Movement has planted more than 30 million trees in Africa and has helped nearly 900,000 women, inspiring similar efforts in other African countries. The trees provide income, firewood and prevent drought. She went on to obtain a doctorate in veterinary anatomy at the University of Nairobi, becoming the first woman in East or Central Africa to hold such a degree.

She was a thorn in the side of Kenya’s previous president, Daniel arap Moi, whose government labeled the Green Belt Movement “subversive” during the 1980s. Maathai protested the proposal of a huge skyscraper in Nairobi’s central park and soon afterwards she was beaten unconscious by police. She protested the elite holding onto privilege in 2008 and was hit with tear gas by police.

There is a lot of poverty in Africa. Yet Africa is not a poor continent. It is endowed with human beings, sunshine, oil, precious stones, forests, water, wildlife, soil, land and agricultural products. So what is the problem? You cannot be secure by using your power to control resources and deciding that you can’t share them with the rest of the world. You will not realize peace that way. You will have conflict.

“People, especially in Africa, must invest in peace, must invest in preventing conflict. We must allow our children to grow, to go to school, instead of carrying guns to shoot each other. You cannot have security by putting borders around yourself.”