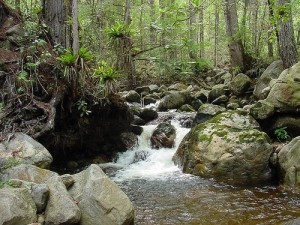 el castillo’, the castle, to the Central Park planted snug against the Iglesia de San Marco. I was prejudiced without cause hearing the story of Honduran President Juan Lindo (1850c.) and his invasion of Guatemala. The Castillo was a bit somniforic until I read that Lindo said the future of the country depended on breaking forth and educating the people.

We met many Honduran Quaker leaders (Martha learned all the gossip). We visited in colonial Spanish-built houses with tile floors and a style of ceramic roof that lets in air, but not raindrops. We couldn’t resist a trip to the thermal pools: hot springs that flow down from the amazing rainforest of the Celaque summit. My image of Honduras as a poor downtrodden country without much culture to mention was completely overturned.

One of the most intriguing parts of my education was learning about a PreColumbian peace process among the Lenca people here called guancascos. The Lencan Indians are bereft of their language and religion, but guancascos is alive and well carving a peace between communities. This unique tradition can instruct our flailing peace efforts. Guancascos is a bilateral peace treaty between two competing groups fighting over territory. It involves days of dance, ceremonies, a change of local leaders in office, and sometimes weddings and baptisms. Both towns attend the process. It’s the biggest event of the year.

Guancascos begins with the Traida de Polvora, the bringing of gunpowder. At this time the l 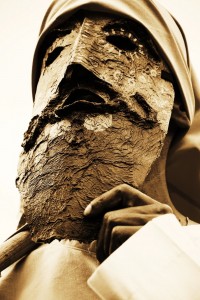 eaders from both sides meet: the costs of the fireworks are negotiated. Every peace summit needs a divvying up of fireworks to whet the whistle for larger conflicts. Then the two communities often have a Broom Dance, where the newly elected leader hands a flowered broom to the outgoing village leader and in turn a Tall Staff is given to the outgoing leader. There’s ofcourse lengthy greetings punctuated by fireworks and music. The parade starts in one town, and then heads to the outskirts, and ends in the second town. The two groups sachet towards the main Catholic Church, over a floor covered with pine needles, and decorated copiously. The climax is the Danza de Gorrobo, the Dance of the Black Iguana, with elaborate costumes and native musical instruments. Don’t these dances sound better than signing a written contract, costly and ponderous?

Guancasco is used in a few dozen villages around Gracias a Dios, and Santa Rosa de Copan. I wonder what ways the Guancasco can instruct Quakers who are a bit stiff around peace initiatives.

It offers formal ways to connect with potential enemies or former enemies. It is renewed every year or every other year. This style of waging peace has happened for 500 years. Ah yea, sounds like a tried and true process to me.