Four deaths and a Bird

The hot summer gusts bow to a rain squall. A hard rain pours into the ground and the air is sharp and ivory. A bluebird flickers among the cedar tree out my window. His eye like a wet stone, fixes on a reality I cannot know. Boston has seen humid days, but the sultry weather has 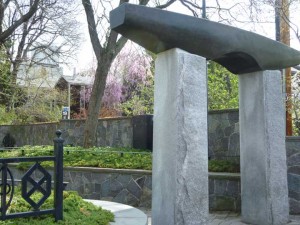 thunder-headed into a storm. Three women were killed in Dorchester this week: Genevieve Philip, 22, Kirsten Lartey, 22 and Sharrice Perkins, 22. Another man Raschad Lesley-Barnes, 24 was killed on Aug 15th at 2 pm outside Dudley Square library. Four deaths in 4 days.

On Sunday Aug 12 four girlfriends were driving together, in a red sedan after a picnic in Franklin Park. At 10:30 they were dropping Sharrice off at her house in Dorchester when a series of shots killed three of the four women.

Kirsten had graduated from St. Johns College and  died on the same day as her father’s birthday, August 12th, 2012. Agabus Lartey, pastor of the Family Life Fellowship church, lost his daughter on his 55th birthday; he lost his wife to cancer in 2010. He said. “This is purely animalistic behavior. This is not human.” Genevieve Philip had her own beauty salon business and was the mother of a 5 year old girl. Genevieve’s mother said, “We’ve just told [the girl] that her mother will be at the hospital for a very long time.”

Sharrice Perkins was known as a stellar jumproper and won the state champions in double-dutch in high school. The fourth friend maybe has the hardest part, now the sole survivor of the riptide rampage. These girls were joyful, serious, perky, stitched inside healthy families. They’re now gone from our sight.

Humans gave up cannibalism, so why this killing? I stare at the rain dripping off the leaves. Each leaf is a green star, bending and bobbing under the drops. The dark clouds were ominous an hour ago, now sit in the sky like a veiled porcelain.

“God, how is life so complicated?” As I watch the rain sink from sky to earth. “How do I interrupt such killing?” Hurting each other is regrettable. But killing? The 6th commandment. Cain kills Able. Jacob steals the rights of Esau. The English demolish the American Indians. Why would one people enslave another? (see www.DoctrineofDiscovery.org/) None of it makes sense.

So as a Quaker, I pray. And like the birds I weave through the world. I work on forgiving others, I Walk noticing the Holy Ground where blood has spilled. I watch cloud, flight, and tree. Here in the interstices of a bird’s talon and the bark of a pine tree is God. Here in the fathomless knowledge of a bluejay’s eye is peace. I may not understand why, but I can know everything 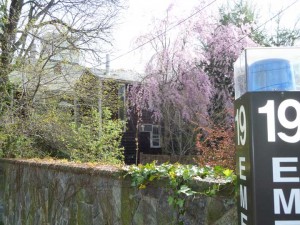 It tells me that killing 3 beautiful women, came from hopelessness. Willowy women whose arms and legs dance with with the wind and who were cut down by revenge. No revenge stirs the glistening cedar tree. Hate lives outside of holiness, outside of love. The clouds rise  like skyscrapers in the fecund sky. The jay, in a ribbon of blue, flies with grace from the shelter of the tree through the leaden clouds.