Exodus- where to where?

You and I are in slavery. We are chained to big corporations that sell us fuel. I can’t live without electricity so I feed into corporate coal, oil and fracking industries every time I turn on the stove, drive a car or recharge my cell phone.

But I believe in freedom. There are viable alternatives to a lifestyle dependent on electricity. You and I can get out of shackles.

So I took the first step. I walked away out of my highly charged life, and onto the EnergyExodus.

Several Quakers, recovering alcoholics, and fired-up students joined a 350mass Exodus from Fall River MA (Aug 28) and walked all the way to Hyannis Cape Cod (Sept 2nd). We started at Brayton Point where there’s a belching coal plant to condemn the tyranny coal has over us. Brayton Point is named after the Brayton family, many of them famous abolitionist Quakers. 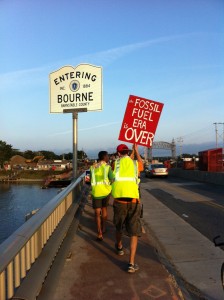 Sixty people walked across the canal on the windy Sagamore Bridge, no small feat. No one was injured, but we were often weary. We were a humble group, knowing that we still think like the Israeli slaves, even as we cross the Red Sea.

We finished up at the Village Green in Barnstable, MA 70 miles and countless blisters later. As we went, we reflected on the Israelites’ journey out of Egypt to freedom. We are shaking off servitude of the fossil fuel pharaoh. We support CapeWind, a huge offshore project to supply clean energy to Massachusetts.

I learned that the 10 Plagues that God sent to Egypt have a strong relationship to what we are suffering in 2013. We have asthma, toxic waste, extreme weather, flooding similar to Moses time. We don’t have Moses. Is the lack of a star leader a deal-breaker? Not at all. We have an enthusiastic movement to stop the fuel corporations. 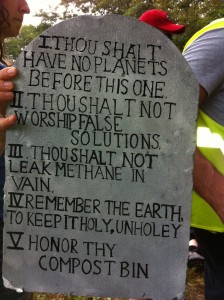 On the EnergyExodus we talked about the 10 plagues and the 10 Commandments The Israelites experienced both. They had strength to march through the wilderness partly because the signs of the times in Egypt were unbearable. The plagues of today are legion. And we need to recognize that these plagues are here to spur us into action. It never is a convenient time to flee your home to the unknown.

Meteorologists are predicting forest fires, storms and acres of flooding. So if tornadoes are predicted we need to fly into action. NOW. Today. With hope.

We will work tirelessly like angels flying in front of the greedy fulcrum of the fuel industry. We are Justice-welders. We create gardens of beauty. We compose curves of music and golden rhapsodies. We work under the looming storm to protect our Holy Planet.

How long will we be shackled to dirty fuel industry? Let us plead, sing and shout. “Let my People Go.”

Sneak Preview: next week blog on Plagues before the Exodus. Yippee!