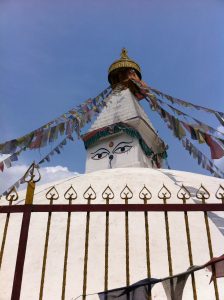 Buddhist stupa, the “1” between the eyes means unity, not a nose

What can be more exotic than Kathmandu, Nepal? We will not go to the world’s rooftop or graze Mt. Everest. But we are happy to live in cooler climes. Mountain breezes brush prayer flags drying clothes equally. The mood is gentler: religion, farms and shops blend together. We are staying at Pradip, Barsha and Prabal’s home, a Quaker family. How soothing to make Darjeeling tea when we want and cook comfort food. Betsy sent us a care package which we got in Kigali and we still have some favorite foods from that!

Most people know about the Himalayas with eight of the ten highest peaks worldwide. But Nepal also has jungle, and parks where the rare tigers and one-horned rhinos can be seen. We have not heard anyone spotting yetis, but there is a Yeti Savings Bank. Are banks our modern abominable snowmen?

Did you know Nepal has the only national flag that isn’t a rectangle? Nepal has never been colonized and therefore doesn’t need an Independence Day. So my assumptions are challenged once again. Why aren’t flags different shapes? Why are most countries colonized, why is this the status quo?

We’ve just past the first year anniversary of the big 2015 earthquake. Although it’s not obvious at first glance, signs of tent housing, rebuilding streets, and repairing temples are everywhere. The progress of schools, resettling Bhutan and Afghani refugees, and better transportation has been delayed. Residents have power only 8 hours a day. So sad for a friendly country. 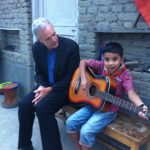 Prabal gets a guitar lesson

We’ve been meeting with many AVP peaceworkers and start our first AVP workshop on May 12th. Meanwhile since we’re not trekking, we’re visiting many temples. In Nepal and India Buddhism and Hindi worship has been blended together. There are hundreds of deities, what a pantheon of power. You learn about the god’s attributes by noting their posture;hand movement or mudra, what they are holding, and what animals accompany them. Thus Shiva is accompanied by a bull, holds a mace or sheath of wheat, right palm raised means welcoming while hand pointed down close to the earth means witnessing to earth’s power. It’s fascinating. I especially like the hand positions and think that they could be a useful addition to our brusque tonal language. 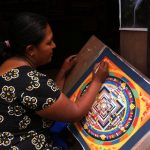 There are several Durbar Squares in and around Kathmandu. Many ancient stupas and gathering places (noted as World Heritage Sites), crumbled in the earthquake. Yesterday Jonathan and I walked around Thamel Durbar (Durbar means palace). Such amazing metalwork and wood carving. In Hanuman-Donna Durbar Square there lives the only living goddess in the world. We went to her palace where she resides. 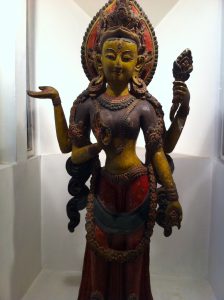 She is called Kumari which means Virgin. In Nepal these kumari, or “living goddesses,” are pre-pubescent girls considered to be the earthly manifestations of divine female energy, incarnations of the goddess known as Taleju. Selected as children, they stay in temples, are carried in chariots during festivals and are worshipped by thousands. They retire when they begin menstruation.

Kumari didn’t appear to meet us.

Oh well. I know where to find the Living God. 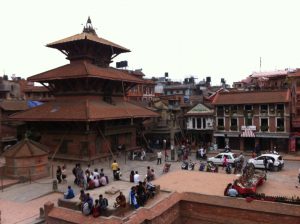