Do Quakers run? Fight? or Knit Together?

Every day I run by the Charles River in Boston. Every week I pick up my knitting. I love both the speed of running and the patience of knitting. My endorphins ramp up with running. Actually some call my carriage jogging, but jog is a sodden word. It does nothing for my endorphins. As I ran today yellow leaves tumbled down from the locust trees– little scraps of plants not afraid to knock into me. The trees put on French polish before dropping their fingernails. I kept running and running, delirious.

Running is straight forward. When running I cut through confusion. Sometimes I run out of fear, running from any weakness that could kill me. I do run to save my life. But I’m not running from imminent danger, just the creeping fear of a future paralysis. I breathe deep and my body tingles.

I love both running and knitting. Gratitude infuses all of us past 50 who can still run. Thanks for stamina and the blood rising up my cheeks. But knitting is more complicated. There’s design, forethought and grace to knitting. How is it that grace pertains to knitting? I can run gracefully. Twoneedles being tossed back and forth is mechanical. Is Spirit involved in knitting? It seems to be the opposite spiritual practice than running.

Knitting helps me weather Quaker thunderstorms. My spiritual nettle is tied up in the yarn. I don’t knit during open worship. Holy croutons, not that. But I do knit during worship when business is at hand. Some time ago I was knitting a hat with 4 strands of thread. The strands got tumbled about. The clerk explained that Trustees had just hired an ex-convict to clean our buildings for 15 hours a week. There was anger. “We invited a low-life person to work at our church? We weren’t warned about this.” There was a stormy silence. I felt my hands automatically threading the yarn back and forth: knit 2, purl 2. I tried to find God’s voice in the friction.

“This is totally unheard of. Who is this ex-con? Can we (the entire meeting) see his criminal record?” Some Quaker parents weren’t sure whether they wanted their children in the same room with a criminal. I felt prejudice and odious racism lurking in these questions. How in God’s name could my sister Quakers be racist? I breathed and knitted. I exhaled and changed needles. How do Quakers let off steam when we are glued to our chairs, our bodies perfectly still? I knitted another ½ a row. Needle front, needle back. There is rhythm, God isn’t static. Forward and backward.

“Shouldn’t we hear from the man we hired whether he’s guilty?”
“But that’s illegal.”
“But he’s willing to talk about how his life turned around. He’s made amends.”
“He’s leader in the AA group.”
“He’s been to jail twice.” Your job Minga, is to keep praying,.
Suddenly I had come to the end of my blue thread and I realized that I had a huge tangle in the middle of my skein. I looked at my orderly rows hanging from the needle: 4 blue knit; 2 white knit: 4 blue , 1 white.

Crap. I couldn’t pull any more blue yarn off the skein. A maze of blue string blocked the next row. The meeting was tense. Tight, staccato voices spoke back and forth to each other. 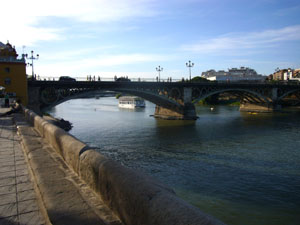 “We should let him in– he’s changed his sinful ways.”
Others said, “We can’t be so naive – he’s been an addict and a killer.”
“We should trust in that of God in him.”
“We should be careful in this case.”

A trustee said, “But our lawyers say it’s illegal to ask an employee to speak openly and jeopardize himself. We must get a waiver.” There was a pause. From somewhere came the smell of fermented apples. Were people just confused between privacy of this man and whether to hire him? What do Friends do when they’re stuck? I turned to my neighborhood, Sarah and handed her the mangled blue skein.

Hold this, I gestured to her. She smiled and opened her eyes in mock fear at the yarn. I started winding the loose end into a ball. I threaded the ball in and out. Sarah held open pockets in the tangle for me to weave onto the ball. My fingers were working overtime.

The clerk suggested a way for this ex-con to speak to the entire meeting. Many heads nodded. Someone apologized if they were sounding paranoid. At this point that assembly of God’s people was in unison after wrestling with the injustice of incarceration, with our doubts that Spirit is in charge, with our fear of violence, with recovering addictions, with our slowness to forgive being ruled by fear. Was it fear? Or was it caution?
The rows of stitches on my needle were larger than my tangle of threads. The meeting closed and Sarah handed me back the loose yarn. My tiny ball had started the size of a grape and was now was the size of a peach. The length of the hat had only grown by a few rows, but the tangle of knots had shrunk.

Quakers get caught in the world’s evils and we don’t know instantly how to excavate ourselves. I get my yarn in terrible knots, feeling stuck. But Sarah held my tangle and progress was made. The design is still in place for my knitted hat. The yarn kept my hands busy so I didn’t feel paralyzed in the midst of a Quaker convoluted fight.

I’d rather be running, but I can’t run from human entanglements. How do you stay grounded during a heated argument?

God knows the path ahead is murky, please keep me knitting and running.