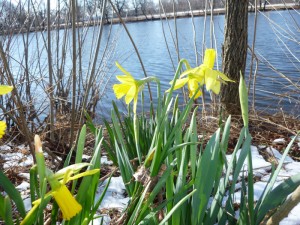 admit it. The Charles River is a gem. I have been living in Cambridge for 25 years and the river is an effervescent, sentinel part of our life. We have River festivals and wildlife; cruisers and duck boats. The river is an artery cutting through Cambridge much older than Mass Ave. It’s as royal as any wedding fruitcake.
Some lack an appreciation for the 129 km river. It starts in Hopkinton (just like the marathon),snakes through Waltham and rolls out broadly as it enters Cambridge.
Although not in tip-top health, the River is beauty queen material. I run 4 miles along the Charles River several times a week. I’m not an engineer, nor a Greenpeacer, nor a Harvard professor. Any foot soldier can enjoy the Charles in infinite ways. You can kayak along its shores, without falling overboardÂ  (my son at 14 did this after a dare). Instead of bemoaning the dirty water , you can take litmus tests of Charles’ toxicity every month. Harvard students jump off Weeks bridge into deep water after exams. Or go goggle-eyed watching Mallard drakes paddling against the current and geese laying eggs. Did you see the rare spotted turtle by the boathouse? Wave to our new neighbors: two swans like twin towers have moved in near the Western bridge.

What did original settlers call it before the royalists named it Charles? Boston was founded on Indian land:Â  a slinky little Shawmut peninsula jutting into a deep water harbor (1630). I say founded, but not without homage to the Algonquin people, Pequossettes and Wampanoags who thrived along the waters. The first name for this scarf of water was Quinobequin. Although no one knows how to pronounce this word, it means meandering river. With some shame and deep honor I remember the peoples that cared for the river 4 centuries ago.
When the Europeans first set anchor near the Shaumut peninsula; the South End, Fenway, and the Back Bay were mere tidal pools behind the expansive river. Boston in 1775 was a scrawny isthmus with a big lopsided head (789 acres). The peninsula’s Neck was merely 100 yards wide, about twice the width of the street at high tide. This was so remarkable: imagine a goose’s slender neck with head perched on top the size of a bear.Â  Boston was blanketed with forest.Â  Mr. Winthrop, Mr. Dudley and early settlers scrambled from Fort Hill, over to Charlestown and upstream to Cambridge looking to find clean water. The Charles River was slow-moving brackish sometimes with a distinctive fragrance.
The water was the beacon. Maybe the world watched Winthrop who settled in 1630 in Watertown near the Perkins School of the Blind. But the river was the attraction. Governor Winthrop, a pioneer and an aristocrat, built his home where clean water was available. And that’s noteworthy. When is the last time Cambridge homesteaders of 2011 ate local fish and bathed in the Charles ? Take heart. We each can help clean up the Charles.
The water isn’t potable today. But it’s not too far away due to an ambitious cleanup launched in 1995. The goal then was to make the Charles swimmable by 2005. We gave ourselves 10 years.Â  Now, 16 years later, swimming isn’t permitted. We have fishermen as far downstream as Magazine Beach. But in his Portuguese accent the man casting his lines, tells me, “Sure dere’s big fish. Later, I throw back.” And his mahogany hand sweeps across the whole river.

The Environmental Protection Agency gave the Charles River a failing mark in 1995.The River would not have graduated. Happily it’s now satisfactorily passing its MCAS. It receives a B plus according to Kate Bowditch from the Charles River Watershed Association. The upper and middle stretches of the Charles are clean for swimming. Getting the “water the color of English tea” with a clean bill of health is challenging.
What can be done? We can’t solve the nuclear fallout from the 4 reactors in Fukushisma; but I am responsible to find out how to reduce pollution of the longest river within Massachusetts.
This is home. Get out of bed, smell the seabreezes. Don’t let the world’s woes stop you from enjoying the Charles. The Algonquians flanked the river, the English settlers brought boats to settled around the potable water of Massachusetts, not the Hudson nor Delaware Rivers. Every time you play around the river, consider a way to keep its enjoyable for your great grandchildren.
We shall be as a City upon a hill. The eyes of all people are upon us… we shall be made a story… Â Â Â Â Â Â Â Â Â Â Â Â Â Â Â  John Winthrop 1630