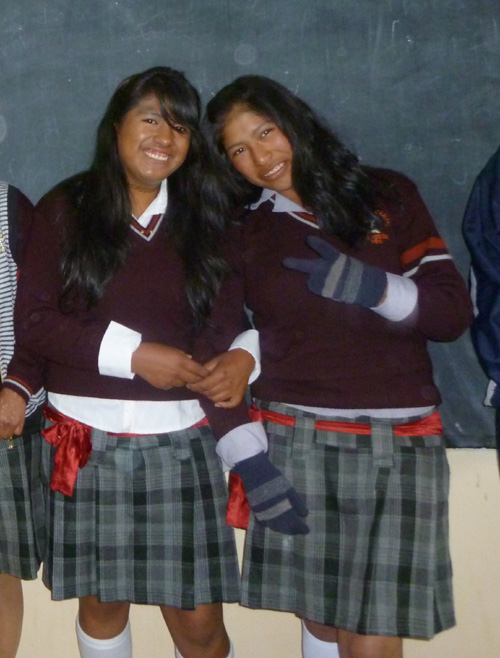 El Alto is perched 1,000 feet above La Paz, the capital or Bolivia. When the sun glitters you stare down into a cascading spiral of lego-like houses. Once your lungs have adjusted to less oxygen, El Alto seems like Kansas City. Except everyone speaks Aymara or Spanish. Except there’s no SUVs. Except instead of greasy hamburgers, open markets sell quinoa drinks and fish soup. And another extraordinary fact: teenagers in Bolivia are eager students. Education is fresh to them.

I fell in love with the Aymara students at Emmanuel Friends school. I met Flavia, Marta, Estevan, and Eduardo in 2011 when I volunteered for 6 weeks. Some classes had 7 students but most classes had 18 students. In high school Bolivians study English twice a week. It’s usually their 3rd language and they can start it as early as 6th grade. Their class load is immense, and even 8th graders study philosophy and technical arts.

The K-12th grade Quaker school has 4 stories, standing tall between the Santidad Iglesia de los Amigos and the sports field.Â  Avenues are wide in 40 year old El Alto, known for its robust political activism and Bolivian modern music scene. Have you ever heard hip-hop in Aymara? Can you pronounce tuqitpachwa qillqanipxstani?

The students eagerly shared their stereotypes about the US and asked me lots of questions. Eduardo showed me his science project on “el Medio Ambiente.” In 10th grade he was preparing to give a poster presentation on green energy. Before class, Flavia sang me the Bolivian national anthem and was learning to site read. I answered her question about the US national anthem by singing “Oh, say can you see…” wondering how I could turn the “Star-Spangled Banner” into a useful English lesson. Bolivian history, like the US has been a series of battles and domination. Nor did I want to tarnish my country as being the evil empire. I wanted to be a Quaker ambassador speaking even-handedly in English class about the positive and negative aspects in the US.

Did I feel that teaching English was difficult? Sometimes. Did I feel confused? Yes. Sometimes, classrooms would switch and as the bell rang I walked into the wrong group of students (They were polite enough not to laugh). Plus, I had to decide what kind of classroom discipline to use. I wanted students to use the Internet, dictionaries, and libraries. Emmanuel students had none of those, not even an English textbook. Was teaching a positive experience? Definitely! Â I learned so much about myself and what Bolivians see as valuable. The students liked learning English lyrics from Mylie Cyrus and 50 cents on their MP 3s. But I was still puzzled as to whether teenage Quakers would understand the peace testimony when Northamericans sing.

O’er the land of the free and the home of the brave?”