Quakers scramble up the rocky hill, our thin sneakers barely gaining traction. In a moment of polarization between Billy Graham and Rev Barber; between the NRA and the survivors of Parkland High School; between republicans in Washington whining to build a wall, and catholics putting jugs of water in the Sonora desert for families crossing the border. Where is the moral ground? 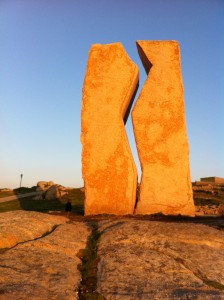 We have a rich history in Quakerism. In the winter the water is stone hard and I shiver. But I know that Quakers broke though the militarism of the US first war against Britain in 1775. They suffered as social outcasts rather than taking up the sword. I know that Levi Coffin, Angela Grimke, Lucretia Mott and Abby Kelley, blew on the embers of equality. With fire, they smoked out the white supremacy and stoked the suffrage for US slaves in 1850s. The embers in the ashes became a firewall of freedom.

What have I learned of Truth? Have Quakers spoken with unbridled tongues? Do we Friends speak with parables like Jesus or Zen koans or Muslim allegories? Quakers like Alice Paul, imprisoned suffragette, and Bayard Rustin, Black rights sculptor, spoke Truth, (sadly not ministry in Meetings). They used the holy tradition of ‘letting your life speak.’ Rustin struck the balance of being an angelic troublemaker, living his vivid sonnet. Rustin’s life putting his body in the way of injustice. That poem is wedged into history.

These ancestors aren’t ghosts. I stand on Lucretia’s and Alice’s shoulders so that now I own a business to transform lives. Now I can vote, now I can bear children when/whether I want to, I can read many languages. I can break up the NY ice floes around the Statue of Liberty. My feet can’t don their shoes, my heart can’t be fed by their blood. Only the living can transform ice into a gurgling stream. We are the Living, but we are only a Legacy if we act daringly.

With exceeding gladness, I stand with my ancestors who broke through the ice to ever-flowing waters. I stand on the shoulders of those who broke their own chains of oppression. I sit beside those whose bellows lit the flames of freedom. I walk with Friends ready to sing of God’s holy city amidst stunted fear and chalky complacency.