A nation that continues year after year to spend more money on military defense than on programs of social uplift is approaching spiritual death.
—Martin Luther King, Jr. 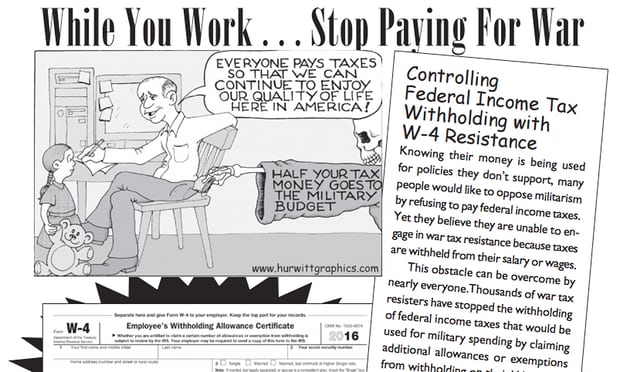 How can I remove myself from the war economy? Jesus’ message is to drop the sword and find wholeness. Can I embody Truth — to become a clear bell — to offer concrete love? I need to take my money out of the US federal bank account. On Tax Day, April 17, 2018, I will not voluntarily pay a nickel for war. I don’t support how the White House is defacing national parks for oil drilling, nor how they deport parents, nor how the chief uses hate-language and allows the assault of women. But I understand that we voted for Donald T in November 2016. I can’t justify stopping taxes because I don’t like his business style and self-serving ethics. I will not pay for a nuclear arsenal that can turn Earth into a toxic desert.

And the Nuclear Clock is now 2½ minutes to midnight or Doomsday. The minute hand of the Clock sends a shiver down my spine, and the Bulletin of Atomic Scientists measure how close we are to the ecocide of nuclear warfare. The failures of political leaders to predict the bellicose tweeting president threatens to push the button for nuclear missiles to attack. Kim Jong-un from North Korea states, “All of the mainland United States is within the range of our nuclear strike.” These gentlemen use hyperbole often.

Here’s the evil reported in the news in early January. “The 45-pound briefcase, known as the nuclear football, accompanies the president wherever he goes. It is carried at all times by one of five military aides. Inside the case is an instructional guide to carrying out a strike, including a list of locations that can be targeted by the more than 1,000 nuclear weapons,” the New York Times explained to us. Even Senator Feinstein admitted to the skewed decision-making of a US nuclear strike. One person is responsible. She said if the president makes a mistake, it’s Armageddon.

There is no button, but there is figuratively a football. Really! Doesn’t a football get tossed, grabbed and sometimes fumbled? This is quite an American metaphor. A U.S. military aide carries daily for us — US — “Patriots” the country’s football? Will the Pentagon supply helmets for concussions incurred from a nuclear strike?

For 33 years now, I don’t pay for weapon or soldier. While studying the Hebrew prophets, I withdrew my hard-earned money to pay for war. I will redirect my taxes to such causes as Habitat for Humanity, the Food Bank, public schools, and to the UN protection of refugees. Two years ago I sent more than what the IRS says that I owe. I take money which unduly kills, and transform its purpose for the Peaceable Kingdom. Money shapes power. Instead of the Pentagon, I send $$ power to Puerto Rican survivors, for peace workshops in Rwanda, and to plant trees. I surprise myself that I have enough money to give to programs that protect the vulnerable and feed the hungry. It’s like eating a ripe peach after break dancing. It’s like stabbing the bloody sword into the fertile soil, then pulling it out and finding the blade of a plow.

“The probability of global catastrophe is very high, … actions [are] needed to reduce the risks of disaster,” say the nuclear scientists. What action will you take?

And he shall judge among the nations and shall rebuke many people: and they shall beat their swords into plowshares, and their spears into pruning hooks: nation shall not lift up sword against nation, neither shall they learn war anymore. —Isaiah 2:4 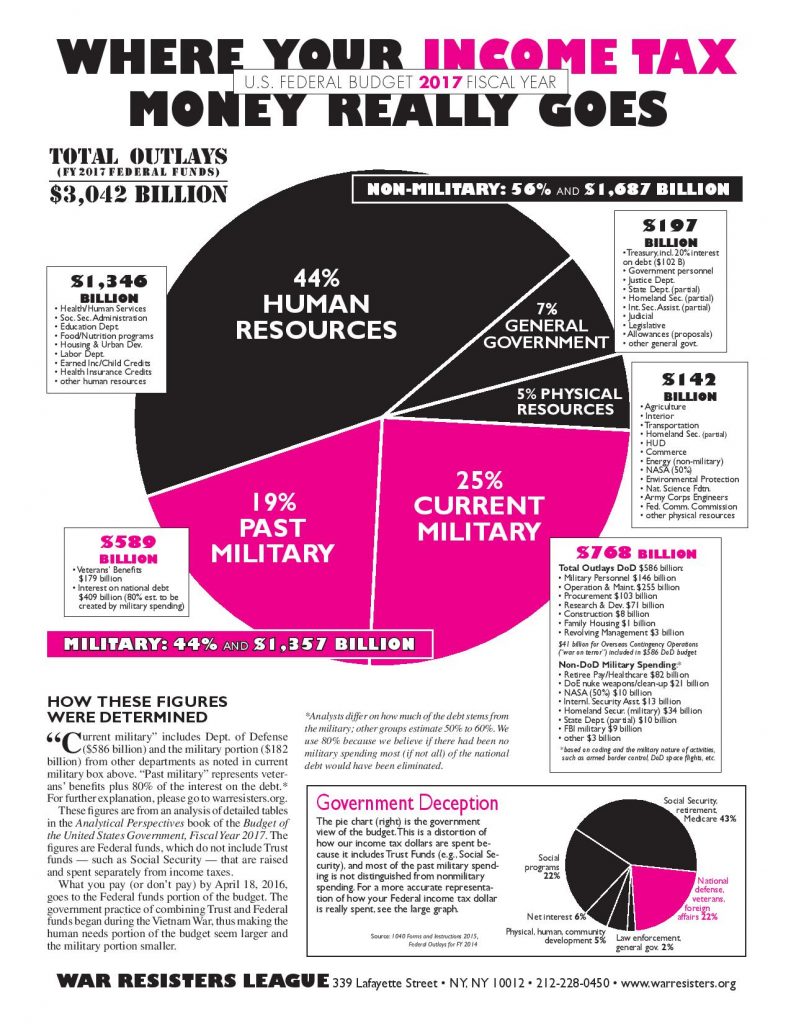